SAVE: Solent Achieving Value from Efficiency

The Solent Achieving Value from Efficiency (SAVE) project was awarded £10 million under the Low Carbon Network (LCN) Fund and was carried out by a multidisciplinary consortium of academics, industry and consultants. The project, led by Scottish and Southern Electricity Networks (SSEN) sought to establish to what extent energy efficiency measures and behaviour change programmes can be considered a cost effective tool for managing peak demand, and whether they provide an alternative to traditional network reinforcement. 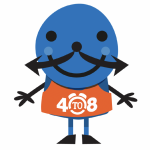 The SAVE project adopted best-practice trial design and recruited a large-scale representative sample of households from the region for the trials.
Using a randomised control trial design, the SAVE project tested a number interventions, targeted at engaging householders in reducing demand for electricity during the network peak hours between 4 and 8pm.

SAVE focussed on domestic customers’ in the local area (Solent region), their energy use and behaviour. The project aimed to: 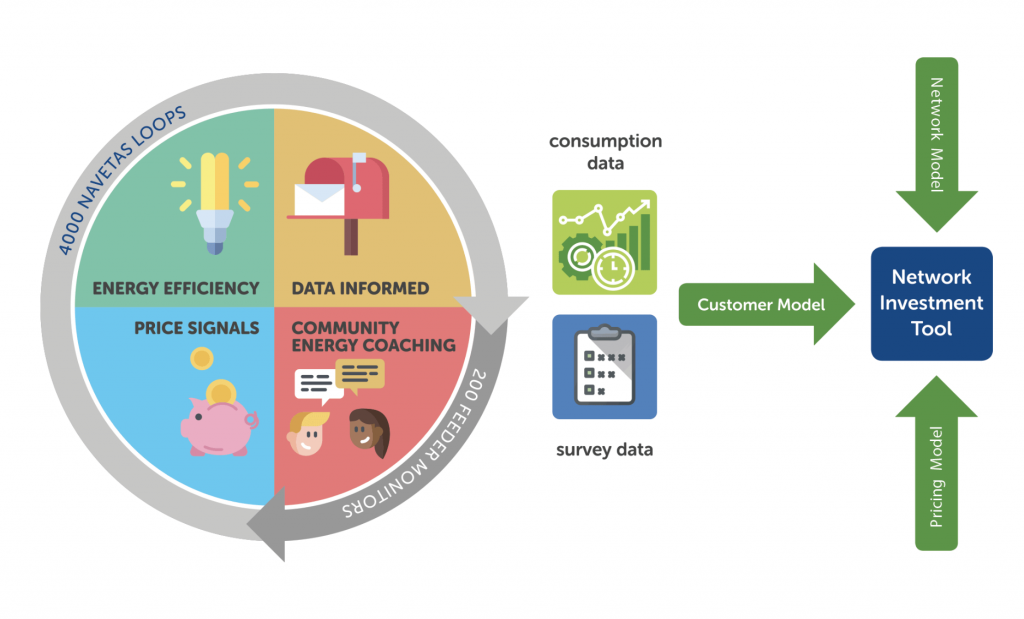 Key findings from the project are contained in the Successful Delivery Reward Criteria (SDRC) reports. 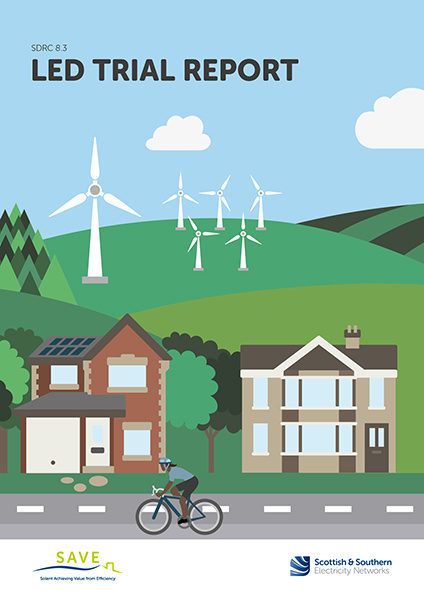 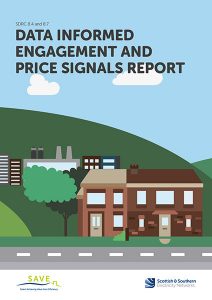 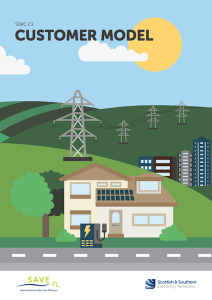 Modelling the spatial distribution of electricity loads of households along with the impact of interventions on different network topologies were primary outcomes of the SAVE project. The Customer Model (CM) provides network modellers a wider range of demand profiles with which to run simulations of network loads under baseline and intervention conditions. Results from the SAVE project Customer Model have been visualised using GIS and are illustrated in the figure below. Click here to see more on mapping the SAVE project results. 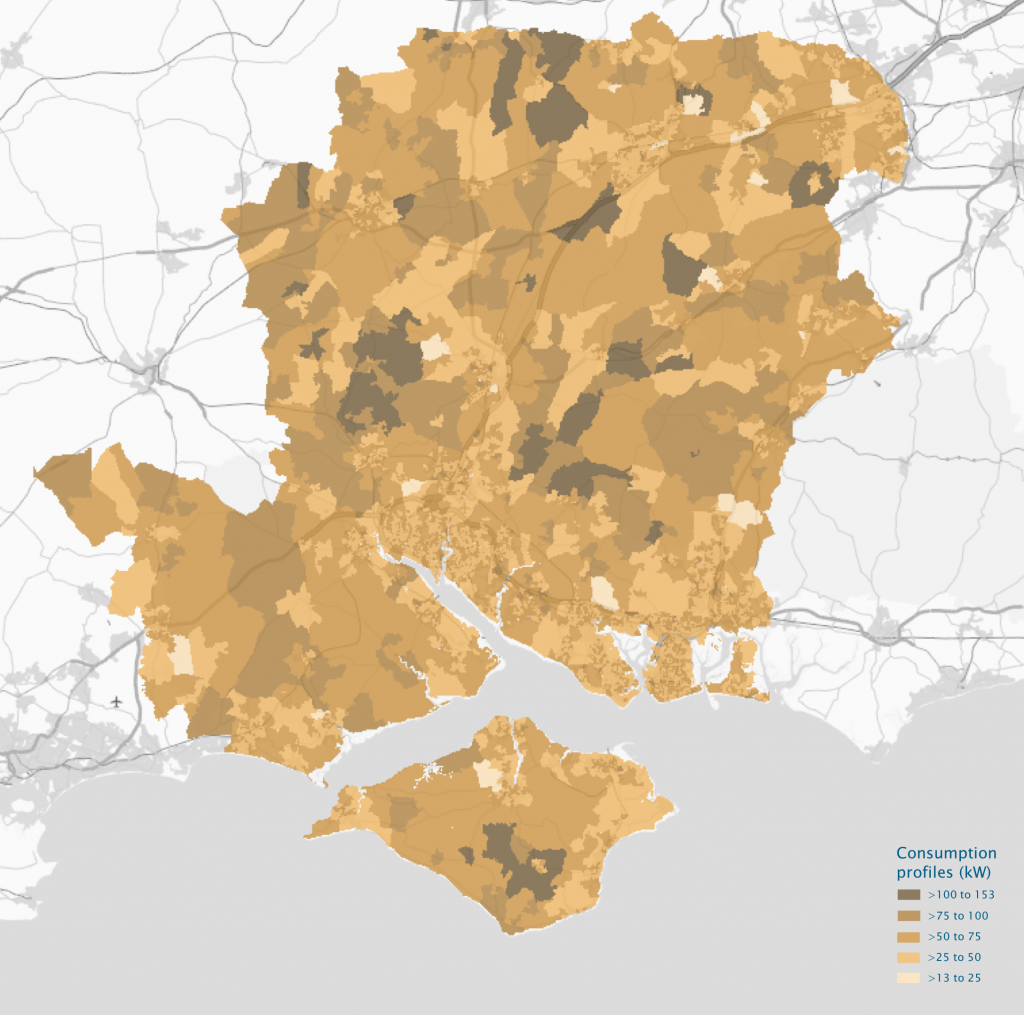 Fun with the SAVE data

In addition to the trial analysis and Customer Model, the project team took advantage of the high respolution electricity monitoring data to perform analysis of power demand during a number of significant events where ‘normal’ patterns of consumption are disrupted. Examining the 10 second power data (averaged over 1 and 5 minutes) for around 3,000 households allowed SERG researchers to look for evidence of synchronised demand that cannot be seen at lower granularity, for example in 30-minute (smart meter) consumption data. 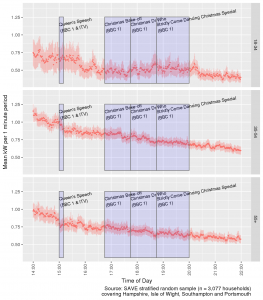 The first analysis examined the change in consumption patterns at Christmas, comparing Christmas day and New Years Day to the same day in the weeks before and after the holidays. Given the wealth of data contained in the SAVE data, we were able to answer questions such as:

Do we see evidence of sychronised behaviour relative to the Christmas television schedule?

Which age group is the most likely to watch the Queens speech?

Similar analysis examined  the royal wedding and FA Cup final on Saturday 19th May 2018 and a number of football matches during England’s 2018 World Cup campaign, and in the latter, we used the SAVE data to estimate the ‘TV pickup’ effect: where demand ramps up rapidly and returns to normal levels during breaks and at the conclusion of events. The results for our regional sample of households compared favourably with the nationwide estimates from the National Grid. 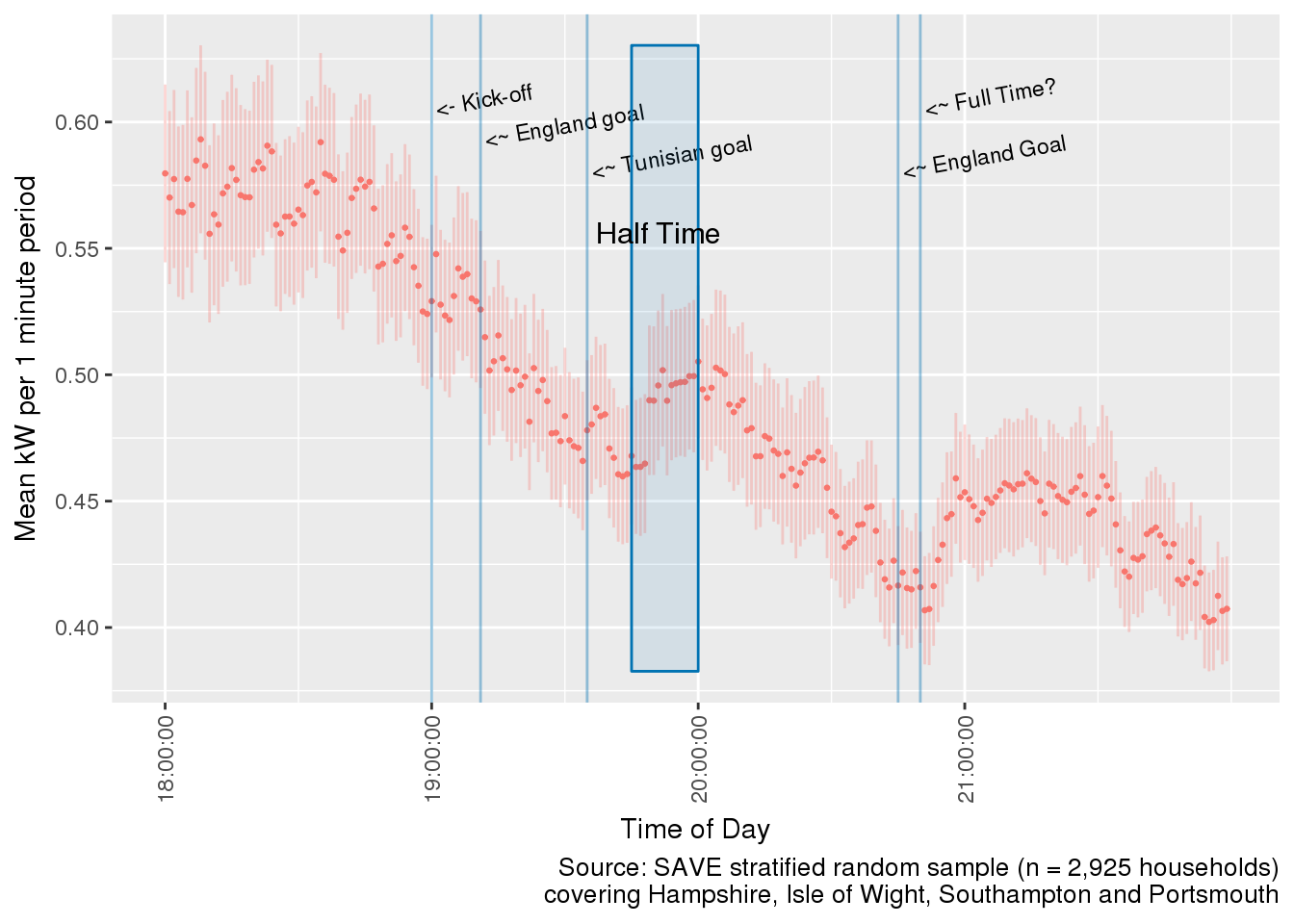 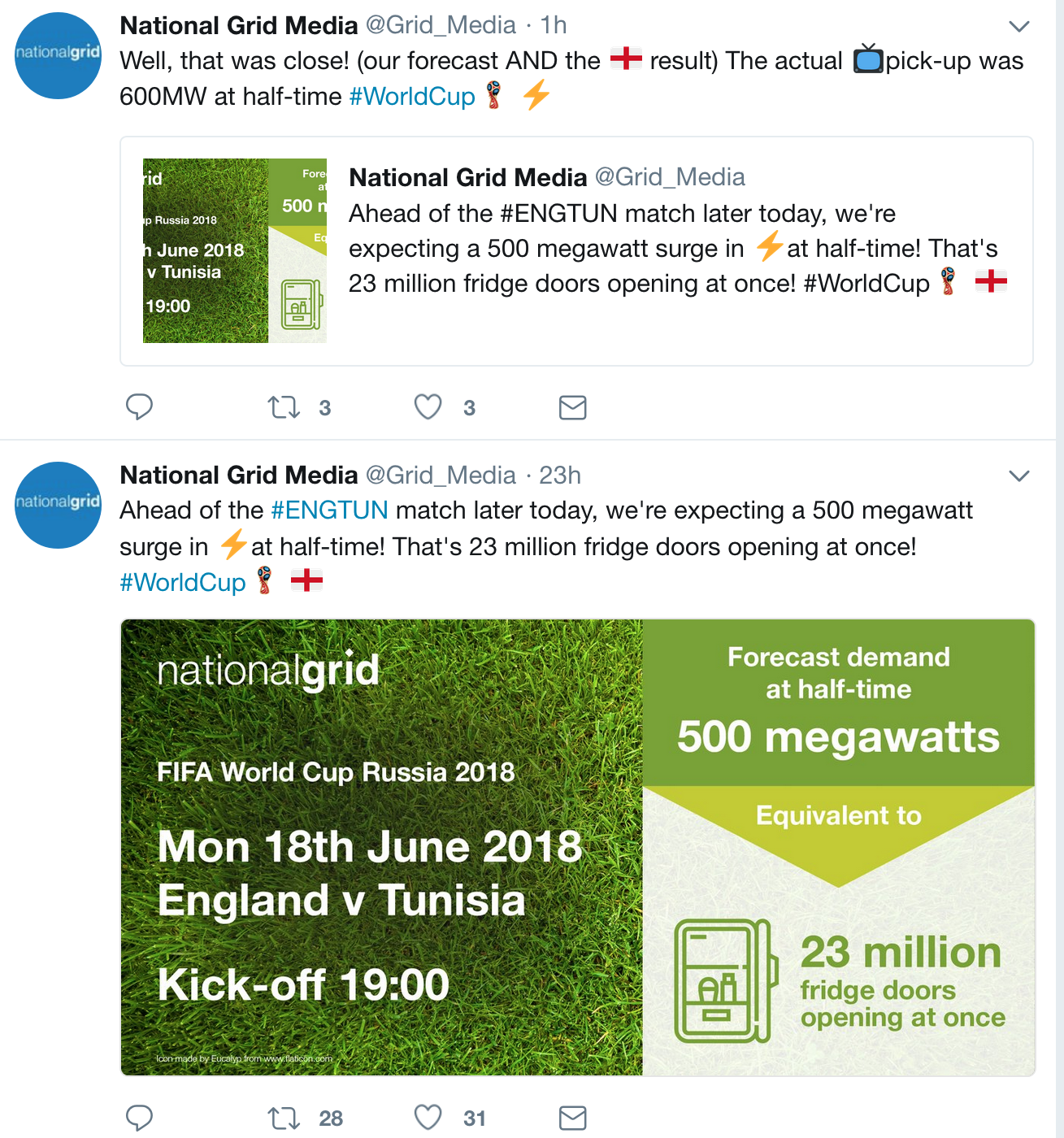 The project was part of a wider UK programme funded by the Low Carbon Network Fund (run by Ofgem, the UK regulator, and sponsored by the Distribution Network Operators) to try out new technology, operating and commercial arrangements. SERG was the academic lead on the project and instrumental in bringing this major research programme to Southampton and the wider Solent region.

More information on all the funded projects in Ofgem’s Low Carbon Network competition can be found in their brochure and on their website.

Data from the project will be archived with the UK Data Service and supported by a GitLab repository. Details will be added here once the deposit is live.

Dr Ben Anderson and Dr Tom Rushby recently responded to the Energy Networks Association’s consultation on ‘flexibility’. In a a short paper summarising relevant ECCD and colleagues’ research to date they concentrated on the following questions: New DSO Services–2020 Product 5 Q6 At what point do you believe it is appropriate to standardise new products? For example, should ... 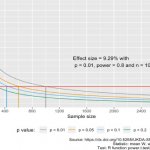 Convincing stakeholders to invest in high-quality, statistically robust research has not been an easy task. A further challenge is presented in communicating research findings and how they can be interpreted as actionable evidence. Through a recent project, SERG researchers developed guidance for both creators and users on the design, assessment and interpretation of applied energy research. 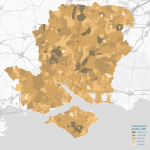 Mapped! Latest results from the SAVE spatial microsimulation model show how the level of residential electricity demand varies by time of day and by place across the Solent region. 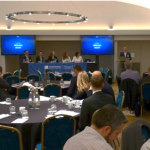 It’s been a busy month or so for the Solent Achieving Value from Efficiency (SAVE) project. On 6th June 2019, Dr Tom Rushby and Prof Patrick James from the University of Southampton team joined project partners at a special event to mark the close of the project. The event was held at Central Hall, Westminster. ... 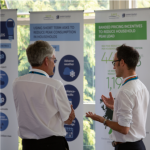 On July 10th, Dr Tom Rushby and Dr Ben Anderson were joined by other project partners to present the Solent Achieving Value from Efficiency (SAVE) project at a special parallel session of the 2019 International Conference for Energy and Cities. A number of key aspects of the SAVE project were described with presentations given on ...

… for England. We didn’t plan the SAVE household sample recruitment and data collection period to over-lap with the 2018 World Cup but we had no end of fun when it did. We started out with some quick analysis of pick-ups (or not) of power demand during the game against Tunisia on June 18th before moving ...

SERG’s Dr Ben Anderson is continuing to make links with centres of expertise in New Zealand through his ongoing EU Global Fellowship. In this case he gave a summary of SAVE and SPATIALEC work at the University of Canterbury’s EPECentre, a world-class Power Industry research incubator that attracts academics and students from around the world ... 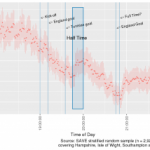 Author: Ben Anderson (b.anderson@soton.ac.uk, @dataknut) We recently posted a brief analysis of household power demand during the May 2018 Royal Wedding which showed a number of surges and dips associated with events in Windsor. In this post we switch to events in Russia – and specifically the first England game of World Cup 2018 (vs Tunisia).  ...

The LCNF funded Solent Achieving Value from Efficiency (SAVE) project is collecting a range of data on household electricity demand. The data comprises electrical power demand, electrical energy consumption and a range of survey data on a large (n > 3,000) sample of households in the South East of England. Staff and students at the University ... 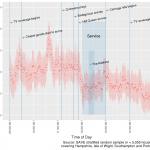 Author: Ben Anderson (b.anderson@soton.ac.uk, @dataknut) A while ago we posted a brief analysis of Christmas Day 2016 which showed that it was a most unusual Sunday. Although there was little evidence of positive  ‘spikes‘ in household electricity demand due to synchronised behaviour, HM The Queen’s TV broadcast appeared to cause a distinct negative spike and there ...

SAVE: Solent Achieving Value from Efficiency 03-2018

SERG’s Dr Ben Anderson recently gave an Otago Energy Research Centre seminar on the SAVE project results to date. He was also invited to give an interview to the University of Otago’s radio station, RadioOne 91FM (“Aotearoa’s southernmost student radio station!”). Interview:   Seminar abstract: “Whilst overall reduction of energy demand is receiving increasing policy attention in the United ...

SERG’s Dr Tom Rushby gave a summary of early SAVE project results at two SAVE ‘Open Days’ on the 10th & 11th of May 2017. The events, which were lead by SSEN but hosted by the University, consisted of a series of short talks and facilitated discussions intended to help inform the project’s future direction. Tom presented ...

SERG’s Dr Tom Rushby gave a summary of the SAVE project to members of the University’s ‘Clean Carbon‘ USRG on the 10th May 2017. The event, which featured a keynote from Prof. Jon Gibbins, Director of the UK Carbon Capture and Storage Research Centre (UKCCSRC) on the state of CCS in the UK, consisted of ...

Author: Ben Anderson (b.anderson@soton.ac.uk, @dataknut) There is often talk in the media about the ‘spikes’ in energy demand caused by breaks in television schedules – when everyone is supposed to jump up and put the kettle on (or whatever). Although these make for good media stories, the largest overall surges are probably to do with cooking ...

The Solent Achieving Value from Efficiency (SAVE) project has recently started to recruit a sample of households from across the Solent region (Hampshire, Isle of Wight, Southampton, Portsmouth) as part of its study of energy use.  To ensure the study has a varied and representative selection of households and property types each address has been chosen ...

SERG’s first report for the LCNF funded SAVE project has been published. The report,  “Report 2.1 – SAVE Customer Model Framework Specification“, lays out the applied research context for the SAVE Customer Modelling Framework (SCMF) and describes its key requirements. The report then outlines a microsimulation modelling approach than can meet these requirements and describes its conceptual foundations and method of ...

The SAVE project’s review of evidence on ‘Energy Efficiency and Behaviour Change‘ which has just been published shows that whilst the great variety of previous trial approaches and contexts often makes it difficult to compare results, common insights have emerged. These include: Customers cannot be engaged as one group – the way in which different people react to attempts to change their energy ...

The Sustainable Energy Research Group (SERG) at the University of Southampton are the academic lead of a newly awarded second tier low carbon project funded by Ofgem and Scottish and Southern Energy Networks (SSEN) valued at a total of £10.3 million, starting in 2014. The consortium project, led by SSEN and entitled ‘Solent Achieving Value ...