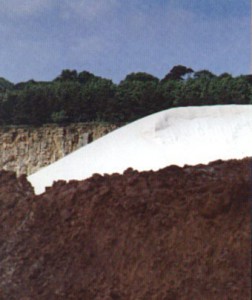 The group has been involved in the development of technologies to use micro-organisms in the removal of iron impurities from silica sands. Silica sand is the principal ingredient used in the production of glass. It is only acceptable by the manufacturers of both flat and bottle glass if the amount of iron oxide present within the sand is below a certain level (Figure 1). In order to meet the iron content specification, suppliers of silica sand to the glass industry have to treat the sand to reduce the inherent iron content.

Iron within the sand can be present in a number of forms, including haematite, magnetite, goethite, limonite and pyrite and can exist as either individual particles or surface staining on the sand grains. Discrete iron particles can be removed by established processes such as gravity separation and flotation. However, removal of surface staining is more difficult and at present the main process used is hot acid leaching. This process involves pre-heating the sand to 140 °C before it is mixed with sulphuric acid, contacted for an hour, then washed (Figure 2). 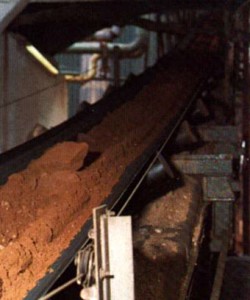 The resultant effluent from this process is neutralised with lime and the precipitate, calcium sulphate, is left to settle out in lagoons. The process is very effective in reducing the iron staining in sand but the procedure is energy intensive, uses hazardous chemicals and requires large areas for settlement lagoons.

In November 1992 the Sustainable Energy Research Group and Hepworth Minerals and Chemicals embarked on a three year research programme to investigate the use of micro-organisms in a bioleaching process, as an alternative method to hot acid leaching. The project aimed to produce a high quality sand product using less hazardous chemicals, which would also result in a safer by-product for disposal.

The study used Aspergillus Niger fungal strains as these are known to convert sucrose to citric, gluconic and oxalic acids. The resulting organic acids could then be used to act as complexing agents for the iron in the sand. The leaching performance of these biologically produced organic acids, and that of synthetically produced acids, were investigated in a series of laboratory tests using both shaken flasks and columns.

The results’ demonstrated that organic acids could reduce the iron content of sand to the required level. However, the results illustrated that the leaching performance of biologically produced acids was inferior to that of the synthetic organic acids. It was also shown that mixtures of acids were less effective at leaching than pure oxalic acid solutions.

The cost of production of pure oxalic acid by biological fermentation was compared with the bulk price of obtaining the acid from commercial sources. Fermentation could offer savings of up to 25% in acid production cost, but the capital investment required for the plant renders this approach unattractive. Large scale computer modelling of the production of glass grade sand using oxalic acid leaching was based on 1000 tonne silos and 220 m³ acid. The model simulated conditions under which the organic acid leaching process would become economic at two major Hepworth quarries. To test the model intermediate scale laboratory column leaching experiments (150 kg) were carried out.

The results of the project (both modelling and experimental) have shown that for certain types and levels of iron staining in sand, oxalic acid leaching using commercially produced acid can offer a real alternative to hot acid leaching.