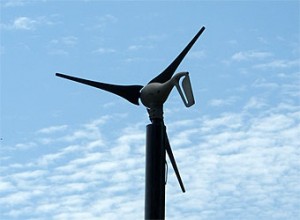 The UK has the best wind resource in Europe and this is now starting to be harnessed through both on-shore and off-shore multi-MW scale wind farms. Micro wind power technology, which is essentially the installation of small scale, 1-10 kW wind turbines on buildings or pole mounted as shown in Figure 1, is a rapidly emerging technology in the UK. Whilst performance figures for commercial wind farms are well known, no comparable data exists for the micro wind market. The Sustainable Energy Research Group is part of the UK micro wind trial which is funded by the Energy Saving Trust. 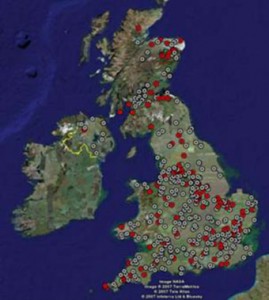 There are currently (as of July 2007) around 500 micro-wind turbine (<10 kWp) installations in the UK. These are either funded through government demonstration programmes such as the low carbon buildings programme (LCBP, 2007), individual private purchases or housing developer led installations. The need for an independent micro-wind trial is pressing in the UK.
The problem of predicting likely turbine performance is exacerbated by the output power dependenancy on the cube of wind speed. Even a small variance between the NOABL database (Numerical Objective Analysis Boundary Layer) wind speed prediction and the actual turbine location wind speed can lead to a dramatic reduction in power generation.
The aim of the trial is to include a diverse range of turbine manufacturers, wind resource locations (urban, suburban and rural) and turbine types (pole mounted and roof fixed). All the turbines are horizontal axis devices due to the very small number of vertical axis machines installed in the UK to date.
Data Collection:

Data from 75 test sites will be collected via GSM modem by the data collection contractor, BSRIA and sent to the Sustainable Energy Research Group for detailed analysis. An existing smaller micro wind trial (Warwick Wind Trial) of 24 micro wind turbines based in the Midlands (central region of UK) will supplement the field trial data set.

Micro wind turbines included in the trial are: