Title: Turbulence and its effects on the performance and wake of a tidal stream turbine.

The tidal energy resource in the UK is one of the largest in Europe and can contribute to our ever increasing demand for low carbon energy. The technology is still at the development stage due to the hash marine environment in which the turbines operate. Tidal flows are highly turbulent with a broad range of turbulent length scales and intensities of around 10%. However, the effects of these highly turbulent flows on turbine performance and wake profile is unclear.
Turbines are commonly represented as actuator discs within numerical simulations and porous disc rotor simulators used to represent turbines in small scale laboratory experiments. This is partly due to the large costs involved with testing a turbine rotor. The aim of this work is to investigate the effects of turbulence on an actuator disc’s thrust and wake, as a first step to understanding the interaction of turbulence with a turbine. Grid generated turbulence was used so the turbulence characteristics of the flow could be controlled so the effects of integral length scale and turbulence intensity on an actuator disc could be isolated.
A steady state RANS simulation was used initially to demonstrate the sensitivity of actuator discs to the turbulence characteristics, in particular the size of the turbulence eddies or length scale. Experimental work also showed significant variation in the mean thrust of an actuator disc when the turbulence characteristics of the ambient flow were changed.
A Large Eddy Simulation (LES) was developed to further investigate the effects of the turbulent length scale on the wake of an actuator disc. Two new techniques have been developed to generate turbulence at the inlet and at the actuator disc for Large Eddy Simulations. These techniques are based on the principles of grid generated turbulence and allow the effects of ambient and device generated turbulence to be investigated, for more details refer to the publications below.  It was found that devices generating larger length scales and higher turbulence intensities resulted in a faster wake recovery, analogous to a turbine operating at a lower tip-speed ratio. The effects of ambient turbulence were found to have a significant effect on the wake of an actuator disc as seen in the figure. The results show that increasing the turbulence intensity reduces the velocity deficit in the wake but has no effect on the wake width. However, increasing the integral length scale of the ambient flow initially increases the velocity deficit in the near wake, but due to increased mixing results in a faster wake recovery causing the wake width to increase with lower velocity deficits in the far wake. 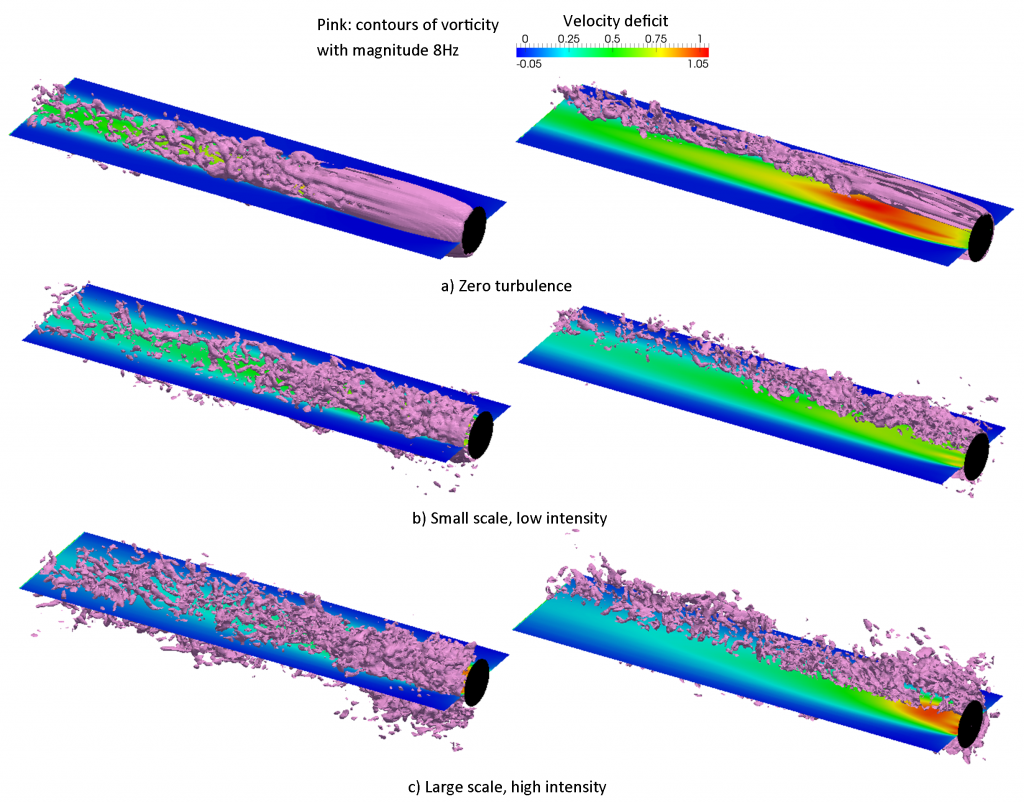 The effects of ambient turbulence on an actuator disc representation of a tidal turbine.

This work demonstrates the sensitivity of actuator discs to turbulent inflow conditions highlighting the need to accurately characterise and reproduce the specific turbulence conditions of a site for accurate predictions to be made.