Cities are the hubs of society and a vast consumer of energy, with 75% of worldwide energy demand being consumed within them (European Commission, 2014). Despite this large figure, only a small percentage of this energy is produced within cities, with the majority coming from outside the regional boundaries. This point can be highlighted within the Solent sub-region, where  97% of the energy consumed is imported (Future Solent, 2014).
With the target to reduce greenhouse gas emissions by 80% by 2050, there is increasing focus on cities implementing decentralised energy and demand reduction measures within the UK (DECC, 2008). Although planning and policy is set nationally, much of the implementation is left to a local authority, and as a result many areas lack the detail planning required to reach the ambitious targets set by the UK government.
While many studies have focused on the feasibility of achieving a low carbon economy, there has been little consideration of the issue of scale. The high energy density of cities make them unlikely to provide their own energy requirements through decentralised energy, and therefore a wider region is likely to be required to reach a low-carbon city. Understanding the scale of this region is important as the administrative boundaries should match the powers to influence with the ability to achieve the solution.
The aim of the research is to compare the potential renewable energy supply against energy demand within each administrative boundary (e.g. City, County and Region). In doing so, it can be understood what size authority must be considered if energy self-sufficiency is to be achieved. By finding this, it can be understood the optimum scale at which low-carbon planning should be made. 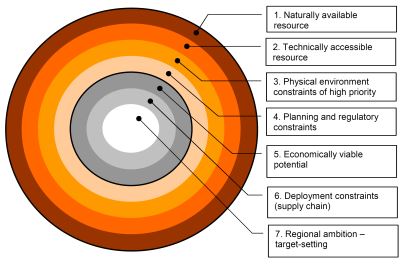 Stages for developing a comprehensive evidence base for renewable energy potential (SQW Energy, 2010)