The offshore oil industry needs to know how to design tensioned pipes (or ‘risers’) that go from the oil rig at the sea surface down to the sea bed, a vertical distance that may be much more than 1000m. One of the problems is that over this length ocean currents can cause the risers to vibrate like guitar strings. Vibrations can lead to metal fatigue and can also cause adjacent risers in an array to clash into each other. Both fatigue failures and clashing can have potentially disastrous consequences. Knowing how far apart the risers should be in order to avoid clashing is an issue of considerable importance, since their spacing has huge cost implications for any offshore installation in deep water.

Vibrations of risers are generated by two or three different mechanisms which produce excitation of different structural modes, and the response consists of a combination of modes, rather like those that make up the pattern of vibrations of a guitar string. The most important mechanisms that cause risers to vibrate are vortex shedding and wake galloping. The first of these is associated with the periodic shedding of vortices of alternating directions of rotation. Wake galloping refers to the motion of one body downstream of another, generated by the non-uniformity of the flow in the wake. The maximum amplitude of vibrations caused by vortex shedding alone is not much more than one diameter, but in a riser this can occur in high modes and the resulting large bending stresses can drastically reduce fatigue life. Wake galloping on the other hand can cause excursions of many diameters at much lower frequencies, and tends to excite the riser’s lowest modes of oscillation. 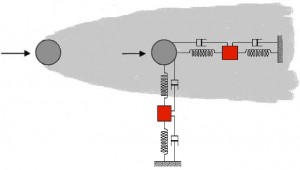 The layout of the experiment.

Almost all of what is known about these two processes comes from experiments in which one or other has been studied under simpler conditions. An approach that has been followed before is to study the motion of a stiff cylinder mounted on an elastic system which fixes its single natural frequency (representing one of the multiple natural frequencies of a riser). The problem with this is that in practice vortex-induced vibrations and wake galloping resonate with two distinct natural frequencies of a riser. Moreover, these two fluid mechanisms interact. Vortex-induced vibrations have a major effect on drag, and thus on the instability of one riser in the wake of another. The motion of a riser undergoing wake galloping affects its relative incident flow speed, which in turn determines the frequency and amplitude of vortex-induced vibrations.

The concept of the experiment

In this project we plan to build an experiment that will for the first time allow us systematically to study the response of a cylinder which is excited by these two processes simultaneously. To do this, the downstream cylinder has to be mounted on a compound elastic system that has two natural frequencies in each direction: in-line with, and transverse to the incident current. This concept is illustrated in the sketch above. The results will help us to understand the interaction between vortex-induced vibrations and wake-induced oscillations, and will provide unique benchmarking data for several groups around the world who are developing software to predict the response of risers to these modes of excitation.