The Hydrodynamics of a Distensible Wave Energy Converter

The Concept of the Anaconda

The Anaconda is a new concept for wave energy conversion. It is just a rubber tube in the sea, full of water, closed at both ends, anchored head to waves. It is squeezed or enlarged locally by pressure variations that run along its length due to the waves.

Squeezing a water-filled rubber tube starts a bulge wave running. The bulge wave travels at a speed that is determined by the geometry and material properties of the tube. The Anaconda is designed so that its bulge wave speed is close to the speed of the water waves above. In these conditions the bulges grow as they travel along the tube, gathering wave energy. Inside the tube, the bulge waves are accompanied by a periodically reversing flow. One way of extracting power from the Anaconda is to use a pair of duck-bill valves to convert this into a rectified flow past a turbine between high and low pressure reservoirs.

The Anaconda was invented by Rod Rainey and Francis Farley. Checkmate SeaEnergy are the licensed manufacturers of Anaconda. 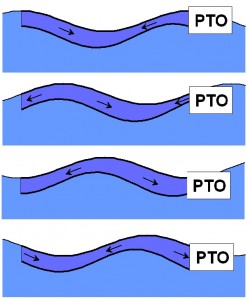 Sketches are shown below of the Anaconda in waves travelling from left to right, at four phases of the motion, with a power take-off  system at the downwave end. Arrows indicate the direction of the oscillatory internal flow. Energy is progressively transferred into bulge waves that according to basic theory lead the water waves by p/2.

The aim of this research is to develop a better understanding of the hydrodynamics of the device, and formulate a comprehensive and validated numerical with which to make more reliable estimates of full scale performance. Experiments will be carried out at scales of 1:20 and 1:10, with tubes of diameters 0.25m and 0.50m, at which rubber hysteresis losses will be proportionately much lower than at smaller scale. Three types of experiments are planned, to provide measurements of internal pressures, tube displacements, radiated waves, mooring forces, and absorber power:

1) measurements in still water with bulge waves generated mechanically at one end of the tube, and absorbed at the other,

2) measurements in regular and irregular waves,

The results will provide insights into the mechanics of the device and support the development of a numerical model that will for the first time include the effects of wave radiation and other factors so far be relevant to other examples of wave interactions with compliant surfaces.

Publications associated with this grant: