Dr Ben Anderson’s work analyzing the charging patterns of a sample of electric vehicles monitored by FlipTheFleet in New Zealand has contributed to a major new report to the New Zealand Parliamentary Commissioner for the Environment (PCE). 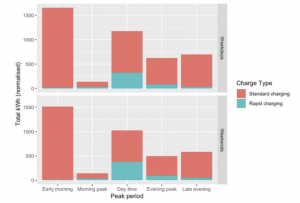 The report, which covers a wide range of analyses from a range of contributors incorporated Ben’s analysis, conducted jointly with Rafferty Parker from the University of Otago, which showed that most EVs in the sample were not being charged during peak demand periods. In addition, the analysis showed that up to 50% of EVs arrive home with 50% charge remaining in the battery suggesting that they could in fact be used to reduce peak demand through vehicle to grid rather than contribute to it.

The report will soon be published by the PCE’s office and FlipTheFleet whilst Ben and Rafferty’s work was presented as: