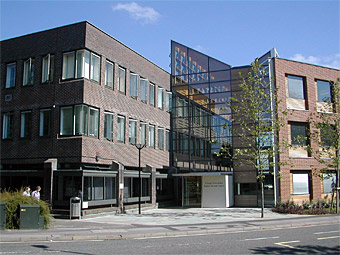 The University of Southampton has three permanently grid connected PV systems on its Highfield Campus designed and serviced by the Sustainable Energy Research Group. The installed capacity of these three facilities is about 20 kWp: 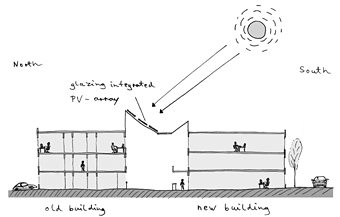 Section of George Thomas Bldg with the PV atrium.

The George Thomas Building (Building 37) is at the centre of Southampton University’s main campus, located approximately 5 km from the city centre. It consists of two separate building parts which are linked by an atrium with a semi-transparent PV roof glazing. The building was created by adding a new building to an existing administration building. The new building part, including the PV atrium, was completed in May 2005. The atrium which links the old building with the new building at all levels is 9m wide and 32m deep. 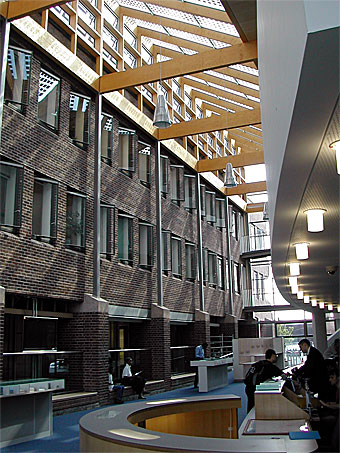 View of the interior of the PV atrium.

The roof of the atrium is pitched at 30° to enable self cleaning through rain run-off and high in plane irradiance. The orientation of the roof is 25° West of South. Predicted irradiance meeting the roof plane is ~1,170 kWh/m² annum and the predicted yield ~9,760 kWh/annum. This provides about 6% of the total electricity demand of the new building part which has open plan offices with a high occupant density.

The Sustainable Energy Research Group is continuously monitoring the performance of the PV array. Sensors measuring the current light level (illuminance), the air temperature and the relative humidity have been integrated into the atrium.

The performance of the PV system is displayed on a screen at the bottom of the atrium. Switch on date for the monitoring was Monday 25th July 2005. 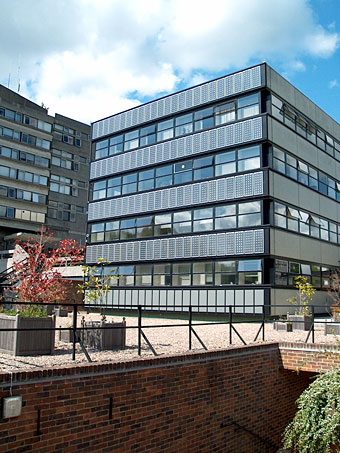 The façade of Building 2 was refurbished due to the poor condition of the original cladding, thus offering an ideal opportunity for replacement by a photovoltaic cladding system. Mono-crystalline silicon PV modules were vertically incorporated into the south west facing façade, amounting to a total system capacity of 7.2 kWp (under standard test conditions). The electricity generated is fed to an internal plant room and, after conversion to AC by inverters, to the main building supply system. The system is extensively monitored to provide information on the electrical output, typical operating temperatures and irradiance levels.

The photovoltaic array consists of 96 high efficiency mono-crystalline silicon modules (BP Solarex), each rated at 75 Wp. Four such modules are combined to form a single string. The electrical cables from each string are connected in series with another (i.e. there are 12 8-module series strings) using a centre shorted technique to limit DC potential. Six small string inverters (SMA SWR 700) receive power from two floors. One single central inverter (SMA 2500) is supplied by the other 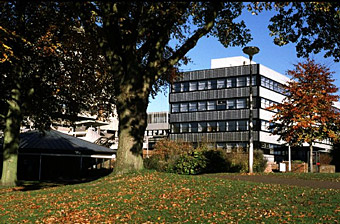 two floors. The system is configured as 24 X 300W strings which enables mismatch studies to be undertaken.

The present monitoring system takes readings of voltage, current, power, temperature and irradiance every 10 seconds and compiles these into 15 minute averaged values. 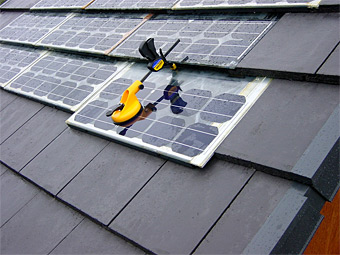 The Eustice Building (Building 9) houses a 0.4 kWp test facility for evaluating PV roof tiles under real outside weather conditions. The test facility was established as part of an EPSRC research programme and is also being used as a testbed for investigations into the electrical behaviour of connectors within PV shingle roofs. The test roof currently incorporates 18 PV roof tiles on a south west facing slope. These tiles, which are the 2nd generation of PV roof tile design, have been installed in 2004.