Professor AbuBakr Bahaj, head of the Sustainable Energy Research Group, was invited to attend the Singapore International Energy Week (SIEW) 2013, where he presented an invited paper and chaired the Round Table on the Role of Government in Ocean Renewable Energy (ORE) and its Impact to Industries. He was also involved in various discussions on policy and the role of regional institutions in Marine Energy. 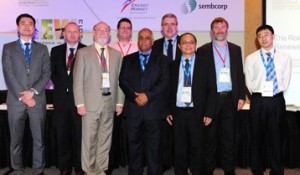 Prof Bahaj moderated and summed up the discussion in the Round Table ‘The Role of Government in Ocean Renewable Energy and its Impact to Industries’. The event was an opportunity for academics, government officials, industry players and civil society groups to come together, with the following aims;