Dr Michael Jack and Anthony Mirfin from the University of Otago and ECCD’s Dr Ben Anderson have developed a model which suggests that building and retrofitting New Zealand’s homes to the highest currently commercial viable energy efficiency level (PassivHaus) would reduce winter heat demand by up to 80% in peak winter months. 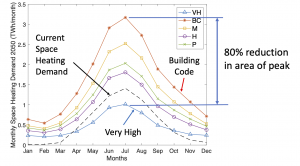 Since future space heating In New Zealand is likely to be driven by electric heat pumps, this would significantly reduce winter demand for electricity for heat in contrast to the current assumption that it would substantially increase.

The model also suggests that such energy efficiency could reduce the difference between summer and winter peak electricity demand by up to 75%. Not only would this make the transition to a ~100% renewable electricity system substantially easier (and therefore cheaper), it may also help to resolve the known ‘dry year’ problem that causes a seasonal mismatch between high run-of-river hydropower generation resource (spring snow melt) and winter heat demand.

Although recent New Zealand policy consultations indicate an appetite for ultra low energy new builds, the paper makes a very strong case for mandating energy efficient retrofit of residential buildings based on their wide-ranging health and energy affordability benefits and their role in enabling a least cost energy system transition. The paper also points out that current resolutions to the winter peak heat and seasonal mis-match problems are assumed to involve capital intensive storage investments. Investing in energy efficiency could be an alternative approach with substantial co-benefits.