Presentation at the Royal Society for the Encouragement of Arts, Manufactures & Commerce (RSA) Sigma President's Lecture 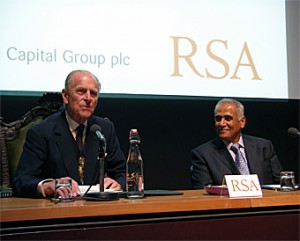 Prof AbuBakr Bahaj was invited to give a presentation at the RSA on the ‘Exploitation of Ocean Currents and Waves for Electricity Generation’. The session was chaired by HRH Prince Philip.

The event was sponsored by Sigma Capital Group plc.

Briefing Note for the Talk:

Exploitation of Ocean Currents and Waves for Electricity Generation 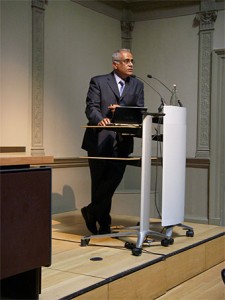 Prof Bahaj while presenting his talk

The oceans which cover more than 70% of the earth’s surface offer a huge energy resource that has the potential of producing large amounts of electricity and fresh water. Ocean energy has many forms and is stored partly as thermal energy, partly as kinetic energy (waves and currents) and also in chemical and biological processes. This lecture will mainly focus on the kinetic part of ocean energy – wave and tidal currents.

Ocean waves, which are generated by the wind as it blows across the ocean surface, travel great distances without significant energy losses. This process acts as an efficient energy transport mechanism across thousands of kilometres. For example, most of the waves reaching the western coast of Europe are generated by storms in the centre of the Atlantic. Ocean currents on the other hand are the resultant of gravitation effects. The Earth experiences a varying gravitational field due the changing positions of the Moon and Sun relative to the Earth’s surface. The oceans and solid earth respond in different ways and this results in the long ocean waves that propagate through the ocean and which we know as tides. The energy for the tides initially originates from the rotational energy of the solid earth. 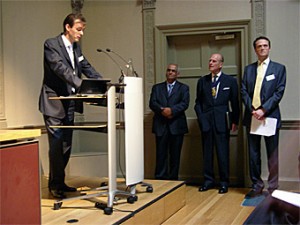 The ocean’s kinetic energy can be converted into a useable form by a plethora of suggested technologies. Tidal currents, for example, can be converted to electricity using conventional turbine technology whilst energy in waves presents different prospects and, at present, has resulted in a wide variety of suggested conversion designs. This lecture will review the current status of ocean energy, highlighting the different approaches and limitations for the potential conversion technologies. It will also discuss the environmental and economic aspects of these developments and the merits of various designs currently being installed around UK.

Exploitation of the tides (known as tidal currents or tidal stream) and the waves for the purpose of electricity production is now a reality. The UK government announced its £50 million Marine Renewables Deployment Fund in August 2004 which allocated at least £42 million of the fund to the wave and tidal stream energy demonstration schemes. By the end of 2007 the first wave farm will be installed around the shores of Portugal and three tidal devices could be installed at various sites around the UK. Considering this, it is clear that ocean energy, as part of the renewable energy industry, is entering a significant growth period. Although the UK currently leads the technology development, there are other experiences around the world, including countries such as the USA, Canada and the Far East. Such developments and their implications will also be discussed during the lecture.