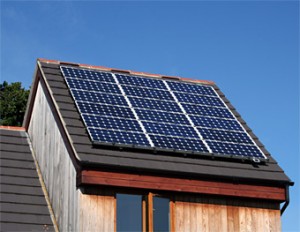 Typical residential PV system on a house in Havant, Hampshire.

Residential grid connected PV systems are relatively simple to design with easy to predict annual yields. However, the headline economics of residential PV in the UK are at present unattractive. A typical small residential PV system (1 to 3 kWp) as shown in the top figure would cost in the year 2000 around £4,500 per kWp installed. An appropriately orientated, unshaded roof in the South of the UK would generate approximately 800 kWh per kWp. A simple estimation of annual income from a PV system is therefore:
Annual income from PV system =
(kWp PV installed) x (yield per kWp) x (avoided cost per kWh)

This calculation is in reality far more complex. Capital expenditure must be charged at a discount rate (usually 5%) and there is an ongoing maintenance cost for the PV system. Whilst the dc side of the PV system would be expected to last 25 years or more, the power electronics (inverter) will need to be replaced during this period.
The cost of domestic electricity is rising quite rapidly at present in the UK which is beneficial to PV but present metering arrangements are still not ideal to maximise financial return. In general, for UK based microgen systems to be most economic, it is best to avoid export from the house. This is shown, in the figure below, which details the value of generated electricity to a householder with a generation subsidy as it presently exists in the UK. Normally there is a good match between the electrical demand of commercial buildings (day use, peaking with cooling in the summer) and generation from PV. This is not the case with residential buildings however, where there can be high levels of mismatch.

Further details on PV in the built environment can be found in the following publications: 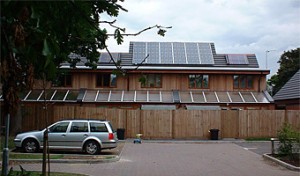 Eco-homes in Havant with PV and solar thermal systems.

Map of the 9 eco-homes in Havant.

Nine eco-homes have been completed in 2004 at New Lane, Havant, near Portsmouth, Hampshire. Each house has a 1.5 kWp PV system and a 4 kW solar thermal system to provide hot water. The PV systems have been monitored by the Sustainable Energy Research Group as part of a DTI field trial in photovoltaics. Each PV system comprises the following:

There are three independant dataloggers. Each datalogger monitors the import and export of electricity from three houses and the performance of the two inverters in each house. The import and export meters are located between the consumer unit and the utility supply of each house. A photdiode / schmitt trigger amplifier device converts the Wh light pulse generated by the meters to a 24V digital pulse (~ 30ms duration) which is recorded by the datalogger. Six inverters are connected to each datalogger using an RS485 daisychain network. A data cable conduit passes between the roofspace of the three linked houses.
Irradiance is measured in plane and on the horizontal using a mono-crystalline sensor (Sensol). Ambient and module temperature are measured using precision platinum resistance thermometers (PT100). 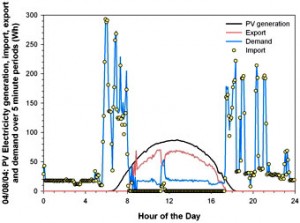 Electricity import / export and electricty usage for one eco-house in Havant on a day in April 2004: Electricity usages times and PV electricity geration times are out of phase.

The six South facing roofs (pitch 45 degrees) receive an annual insolation of approximately 1200 kWh/m². The PV systems have a rating of 1530 Wp, assuming a performance ratio of 0.70, which would produce 1285 kWh of electricity per year. (The performance ratio is a measure of how well a PV system performs in comparison to an ideal system and accounts for losses such as inverter efficiency, temperature effects, dc losses and mismatch.) The measured average PV generation from the six houses with South facing PV systems was 1235 kWh which matches closely to the predictions. This annual generation covers about 1/3 of the electricity demand of a typical UK house (~4000 kWh). The two east facing roofs and the west facing roof, receive slightly less sunlight (predicted at ~950 kWh/m²annum) and so will generate slightly less power, ~1020 kWh/annum.
The graph shows a typical daily electricity generation / consuption profile for one of the PV houses in Havant. There is a clear mismatch between PV generation and electricity demand, with the peak generation from the array (South facing slope) occurring when the house is unoccupied. Considering the points raised above on economic return, an operation like this is not economic. This highlights the importance of matching user behaviour and renewable energy generation.

Further results of this work have been published in: