Dr Ben Anderson and Dr Magesh Nagarajan have presented preliminary results from the IMPETUS project at the 2016 European meeting of the International Microsimulation Association. 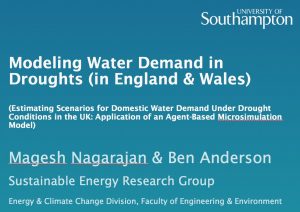 The paper described their approach to modeling domestic water demand in England using a synthetic 1000 household dataset and demonstrated the results of an Agent Based Model to project water demand forwards in time in response to: