In the wake of the recent IPCC 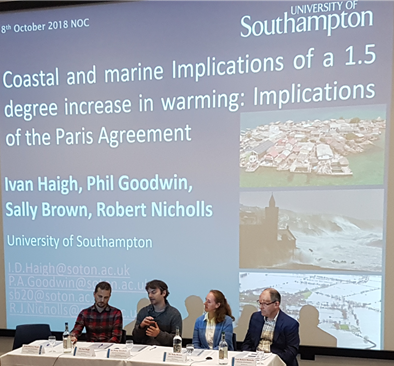 report of global temperature rise, an interdisciplinary team from the University of Southampton including researchers from ECCD has produced a report addressing the impact on coastal communities from rising sea levels. The team analysed emissions pathways and coastal impacts associated with meeting the Paris Agreement targets, after winning funding from the Department for International Development, International Development Research Centre, Natural Environment Research Council, and the UK Government Department of Business Energy and Industrial Strategy. The team comprised ocean scientists, Dr Phil Goodwin and Dr Ivan Haigh, and coastal engineers, Dr Sally Brown and Prof Robert Nicholls, with Dr Sally Brown also a lead author on the IPCC Special Report. The Southampton team presented their findings based on five published papers in a seminar at the National Oceanography Centre on 8th October, the day that the IPCC Special Report was released.
Climate models and observations indicate that surface temperatures rise along with the total amount of carbon dioxide emitted, with other greenhouse gases also contributing. The group’s research indicated that at the current rate of emissions we are on course to exceed 1.5 °C during the 2030s or 2040s. To stabilise temperature at 1.5 °C requires significant reductions in carbon emissions, with a zero-carbon global society by needed by 2050. Other greenhouse gases must also be restricted, such as methane and nitrous oxide. A reduction in the annual emission rate needs to happen urgently in order to meet the 1.5°C target. This reduction is highly ambitious and many more transformational changes are required to the way we live to achieve this. Restricting warming to 2°C requires us globally to become a zero carbon society during the second half of this century. Thus, urgent action is required to reduce emissions to reach both the 1.5°C and 2.0°C targets set out in the Paris Agreement.
The team also generated scenarios of sea-level rise corresponding to 1.5°C and 2.0°C worlds, and compared these to a future where there was no mitigation. Unlike temperature, sea-level will not stabilise if emissions levels are achieved and kept constant, as oceans take a long time to warm and land-based ice takes time to melt. This process is called the commitment to sea-level rise and it has long-term implications. The Southampton scientists found that under stringent climate change mitigation, sea-levels may only rise 0.40m by 2100, as oppose to 0.78m for a non-mitigation (with respect to 1985-2005). However, the real benefits of sea-level rise are over multi-centennial timescales. Here, sea-levels may rise in excess of 4m if climate change is not mitigated for, whereas they may only rise 1m for a mitigation scenario. This produces challenges as we will need to adapt to sea-level rise today where infrastructure has long design lives, despite the threat not being immediately obvious. Today, there are 100 million people living in flood prone areas, but by 2100 (also taking account population change), climate change mitigation could lead to 125 million less people being exposed to flooding. Climate change mitigation is essential to reduce long-term flood risk, particularly in areas that are vulnerable to sea-level rise such as low-lying deltas or small islands. Declining pH in the oceans will also affect vulnerable marine ecosystems over the next few decades, having detrimental effects on ecosystems, such as corals. The team’s findings support the IPCC’s wider findings that climate change mitigation is extremely beneficial, both at 2.0°C, and at 1.5°C.
The video of the event is available here: https://www.youtube.com/watch?time_continue=4&v=KZydMv20pYY
The papers which the Southampton team produced are here: