The ongoing evolution of the decennial UK Census presents social, policy and commercial researchers with both a challenge and an opportunity. The challenge is to transform ‘census-taking’ by finding robust alternative methods for creating small area socio-economic indicators over time. The opportunity is to transform the very nature of the socio-economic indicators themselves using new analytic methods applied to new geo-coded datasets and to radically accelerate the temporal cycle from decennial to annual or sub-annual production. 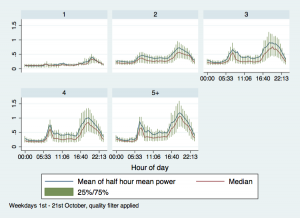 Half hourly power consumption by time of day and number of residents (October 2011, University of Southampton UoS-E electricity monitoring data)

This report, which summarises the results of a feasibility study funded by the Office for National Statistics through their Big Data project, explored the possibility of developing methods for estimating ‘census-like’ indicators from samples of household electricity power demand data.
The work concentrated on temporal patterns of power demand that may be able to more robustly distinguish between household types due to the potentially different timings and intensities of their everyday habits and routines.
The analyses suggested that there were differences in household temporal power demand profiles that may be more homogenous within some household groups. The number of occupants was a major driver of power demand at all times of day and the presence of children or of residents aged 65+ also played a role at specific times.
This work was carried out in parallel with the ESRC funded Census2022 project which has carried out related analyses on larger scale datasets.