Newton Fund Institutional Links Grant between ECCD at the University of Southampton, and the Centre for Research in Energy Systems and Technologies (CREST) of the University of San Carlos aims to build capacity in the two key areas, namely: 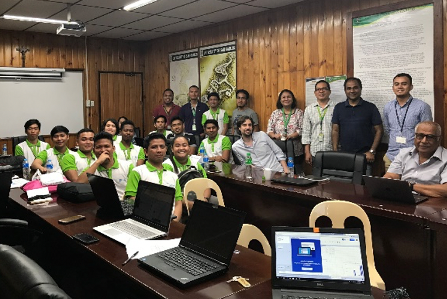 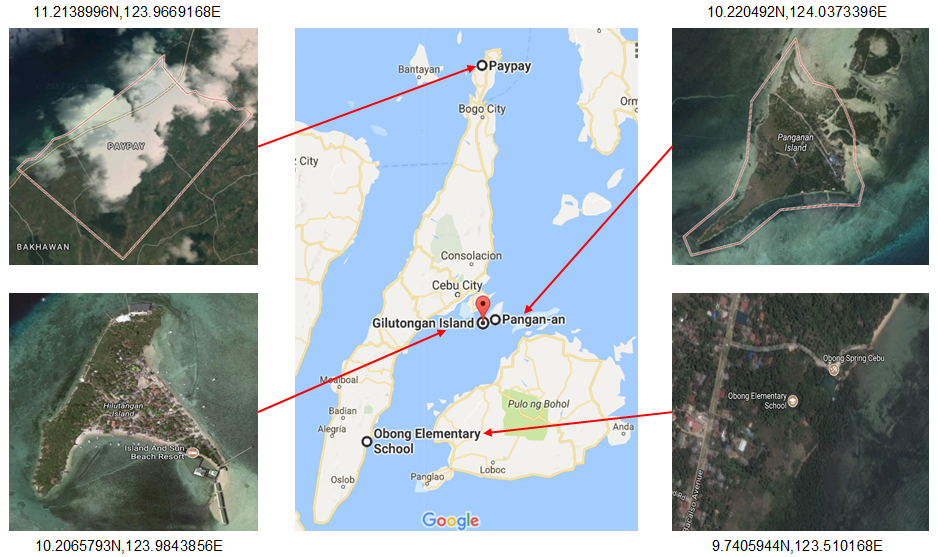 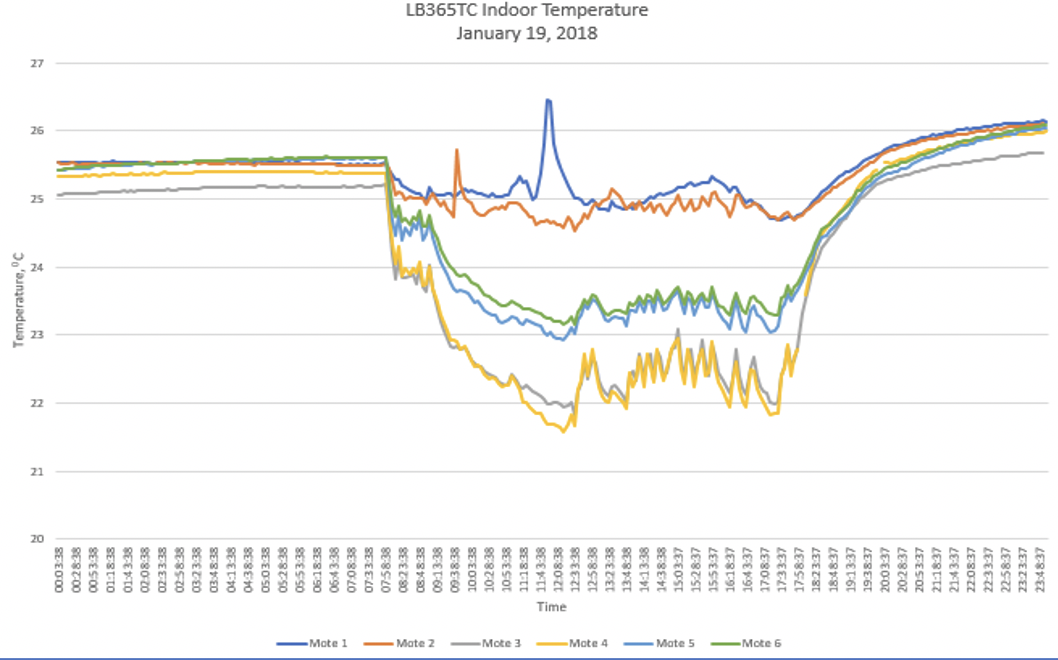 This Newton Fund Institutional Links Grant between the Energy and Climate Change Division (ECCD) of the University of Southampton, and the Center for Research in Energy Systems and Technologies (CREST) of the University of San Carlos covers two areas: energy efficiency in buildings, and energy access (rural electrification). This report covers the preparatory work being done by the USC team specifically intended to define training themes for the research attachment at ECCD.

In the energy efficiency component of the project, two buildings in the USC Talamban Campus will be identified for refurbishment and retrofit studies. This is in line with the first project objective, which is to “address energy efficiency in buildings through refurbishment covering current building stock; tools to develop capacity will be established and will use the USC campus as a case study.”
The image below shows the major buildings in the campus. 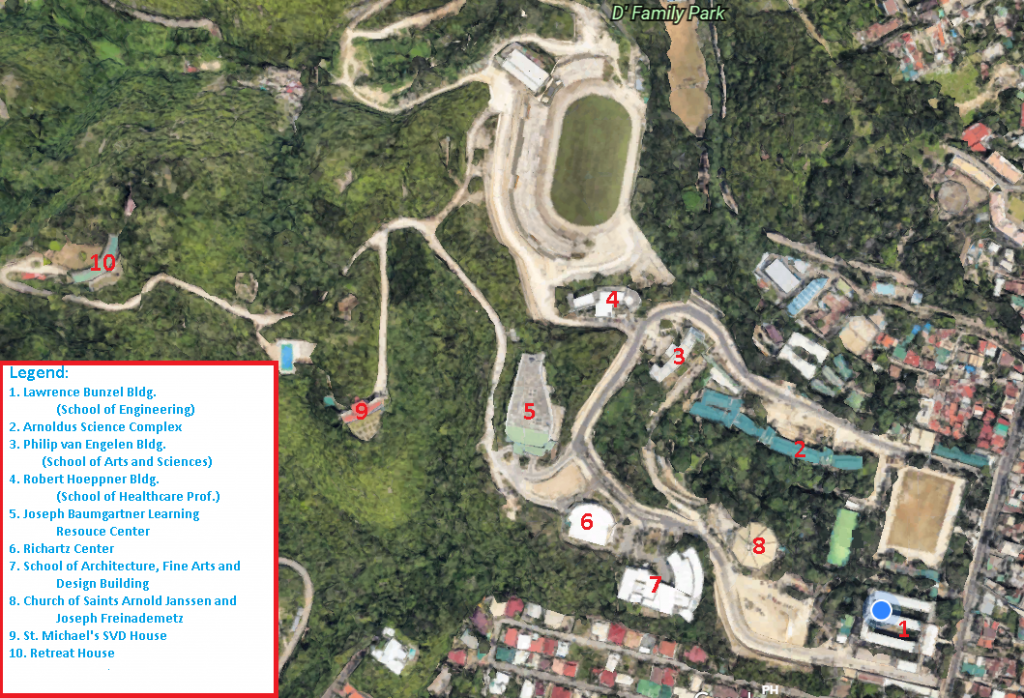 The USC team has identified four rural/island communities within the province of Cebu that may serve as research environments for energy access. These are
1) Sitio Upper Pilihan in Barangay Obong, town of Dalaguete;
2) Gilutongan Island, town of Cordova;
3) Barangay Paypay, town of Daanbantayan;
4) and Pangan-an Island, in Lapulapu City.
The locations of these communities within Cebu Province are shown in Figure 7.

Figure 7. Locations of the potential communities for the energy access component of the project

Upper Pilihan in Obong, Dalaguete is a small mountain village located near the company Dolomite Mining Corporation. The village is located 5 km away from the main road and can only be accessed via motorcycle-for-hires. Houses are located far from each other. There is an open area within the community where a small chapel and a volleyball court is situated. This is considered the center of the community.
The community has 11 households with about 30 residents. The population consists mostly of adults with only a few children and teenagers. The main source of livelihood is farming, the main crops being corn and green beans or haricots verts (commonly called Baguio beans in the Philippines). The corn produce is mostly for self-consumption while green beans are sold at PhP 2 (GPB 0.03) per kg at the nearby Mantalungon market. The other source of income is raising goats.
The village relies on natural springs for their water supply. The nearest spring is located in the next village, about 2 km from the community, called Tubod. The residents use water gallons and barrels to fetch and store water. The community also assembled rain catchment systems in their homes to store rain water for domestic use.
Houses are not connected to the grid, and they have no alternative source of electricity. Because it is located in a secluded area, connecting the community to the electric cooperative grid is not economically feasible. Some households use truck batteries to provide lighting and to power radios. These batteries need to be recharged at charging stations in the lower part of the barangay. Other residents who have mobile phones have to go down from the mountain village to the lower part of the barangay to charge their devices.
Opportunities for energy access research and development in the village include:

Barangay (village) Gilutongan in the municipality of Cordova, Cebu includes both Gilutongan and Nalusuan islands. The western coastline of Gilutongan Island is a legally declared marine sanctuary. The island can only be accessed by small tourist boats or bangkas. The total land area is 15.3 hectares (0.153 sq km). Residents live in small wooden houses with metal roofs. There are no other structures in the island community except for an elementary school.
As of 2012, Gilutongan Island has 1,543 residents in about 251 households. The main sources of income are ecotourism and seaweed culture. The other sources of income are small-scale fishing, vending, and gleaning and gathering of marine products.
The island has no local source of potable water. Residents buy water transported from the nearby Mactan Island using small motorized boats. In 2004, the cost of a 5-gallon jerry can of water is about PhP 15 (GBP 0.23). Electricity is provided via diesel generators and is available only from 6 pm to 10 pm. In 2004, the residents were charged PhP 20 daily (GBP 0.31) for electricity use. In 2015, Edison Lamps donated solar panels that were installed in the elementary school of the community. This allowed for power generation for school use.
Opportunities for energy access research and development in the island include:

Paypay is a village in the northern Cebu town of Daanbantayan. It is in one of the areas heavily damaged by supertyphoon Haiyan in 2013. To help displaced local fishermen and their families, the Philippine and French Red Cross, together with French NGO’s, established the Red Cross Village in 2015. The village can be reached via public bus that goes to Daanbantayan.
The village has 128 houses with 127 households (one house is currently unoccupied), built on 1.3 hectares (0.013 sq km) of land. Each house has a floor area of 30 sqm. Most of the residents are engaged in fishing, while the rest are working in the livelihood center within the community.
The community is mostly powered by off-grid solar energy generated from two production facilities. The solar PV systems were donated by French NGO’s and installed by Electricians Without Borders. The first production facility is rated at 13 kWp with 48 solar PV panels installed on the 175 sqm terraced roof of the day care and health centers. The second has 20 kWp with 72 PV panels installed on the 180 sqm roof of the livelihood center. Each household has a energy consumption limitation of 800 Watt-hours per day with a monthly fee of PhP 150 (GBP 2.30). There are diesel generators used to charge the batteries of the energy storage system when production from solar energy is not enough.
Opportunities for energy access research and development in the island include:

Pangan-an Island was the first solar-powered island in the Philippines. The village can be reached can be reached via a 30-minute motorized boat ride from the port of Cordova. As of 2015, the island has about 3,490 residents in 405 households. The family income ranges from PhP 3,000 to 5,000 per month (GBP 46 to 77), which is well within the Philippine poverty line. Majority of the families are beneficiaries of the Pantawid Pamilyang Pilipino Program (4Ps) – a flagship welfare program of the government. About 46% of the population is above 18 years old. The main sources of income are fishing, ecotourism and shell craft making for souvenir shops. Other families engage in seashore gleaning, village store retailing, boat servicing, and livestock raising.
Majority of the houses in the island are made of wood, coconut lumber, nipa roofing and bamboo. Some houses are made of concrete materials and galvanized iron sheets for the roof. There is an elementary and a high school building, a barangay hall, a health center and a basketball court.
In 1998 the government of Belgium, in cooperation with the Philippine Department of Energy and the LapuLapu City local government, installed an off-grid 45 kWp solar PV plant with energy storage that was operated and maintained by a cooperative established by the residents of the island. The off-grid system consisted of 504 90 Wp solar PV modules, 118 2V 1800 AH lead acid batteries, charge controllers, inverters and a low voltage distribution system. In 2011, the batteries of the plant has deteriorated so much that the energy storage system has stopped functioning and is no longer operational to date.
Currently, the solar PV power plant only functions during the day with a highly decreased efficiency. At night, the community uses a 32 kVA diesel generator to supply electricity from 6 pm until 10 pm. The island does not have any supply of potable water. Residents collect rainwater via their own water tanks and they buy potable water from neighboring islands.
Opportunities for energy access research and development in the island include:

We believe the Energy for Development group of SERG can share appropriate knowledge to the USC team’s pursuit of evaluating the provisions for energy access to rural areas in the Philippines, based on SERG’s work in Africa. One of the team’s interests is in learning business and community models for an economically sustainable off-grid microgrid. The team would like to look at three aspects of the project, namely: