Work by Dr Ben Anderson and colleagues at the University of Otago suggests that future energy-efficient lighting uptake in New Zealand could reduce total annual demand by 1 TWh and reduce the highest winter evening peaks (at 17:00) by at least 500 MW (9%). The winter evening demand reduction would be roughly equivalent to avoiding the need for additional generation capacity of the scale of New Zealand’s Huntly Power Stations 1–4 (coal/gas) plus the Stratford peaker plant (gas open-cycle) and has clear implications for any electricity system that is intending to transition towards ~ 100% renewable generation at least cost. 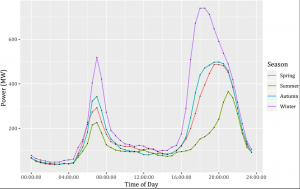 In the past energy efficient technologies like LEDs have usually been assessed for their effect on overall annual consumption. This is one of the first studies to consider their effect on the timing of that consumption and makes use of a unique household lighting circuit monitoring dataset to do so.

The study, developed as part of Ben’s MSCA Global Fellowship and recently published in the journal Energy Efficiency, combines data from the monitoring of lighting circuits in a sample of New Zealand households with a published model of low energy lighting uptake out to 2029. This enabled the team to estimate: 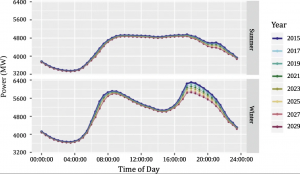 Even though the paper reports an extremely simple technology substitution model with no assumptions of behavioural change or rebound effects, it provides an indication of the potential value of promoting particular energy efficiency measures in the residential household sector as we transition to a 100% renewable electricity system. As Ben notes:

“Traditionally winter evening peaks in New Zealand have been met by carbon intensive peaking or hydro generation. The decarbonisation of heat means more winter evening peak demand. Finding ways to permanently reduce demand for other energy services such as lighting is really important for preserving hydro resources in dry years and avoiding the use of carbon-intense generation if there is little wind. This reduces the need for significant over-building of renewable generation and/or storage which would only be used during periods of highest demand. For nations looking to reach 100% renewable electricity supply with least cost permanent reductions such as this could be quite crucial.”

As the paper notes, the results also imply that electricity distribution networks may avoid costly reinforcement of constrained lines if LED uptake could permanently reduce winter peak demand consumption. It might even be cheaper to give out LEDs to all households on highly constrained distribution lines than to re-build the local network…

The findings suggest that active intervention to support households to take up efficient lighting could be justified by the benefits of reductions in peak demand in addition to reductions in overall energy consumption. This is especially relevant for countries like New Zealand that currently do not have subsidies for energy-efficient lighting uptake. Whilst the forecast model used in this paper estimates that energy-efficient lighting would be taken up over 14 years through market forces alone, this process could be accelerated through policy measures by government or pricing (or even installation (Rushby et al. 2018)) interventions by electricity sector businesses if it was recognised as a cost-effective way to avoid generation and distribution infrastructure and reduce future greenhouse gas emissions.