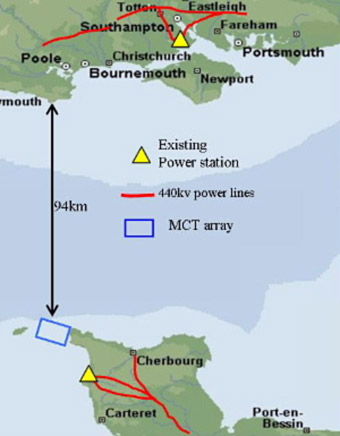 The Alderney race has a close location to main grid power infrastructure in France.

The Race of Alderney lies between the channel island of Alderney and Cap de la Hague on the West coast of France. It is a large site and has the possibility of feeding electricity into the channel Island of French mainland grids. The Race is approximately 4 miles wide and there are large areas with mean depths of 30, 35 and 40 m, which are within the expected range of what is anticipated to be the first generation Marine current turbines. The strongest tidal streams are found on the east side where the depths are slightly shallower than the West half. The spring rate of the north going stream is 5m/s (9.5 knots) and that of the south going stream is 3.5m/s (6.75 knots). Flow speeds in the West Race closer to Alderney are still very strong compared to other UK sites. 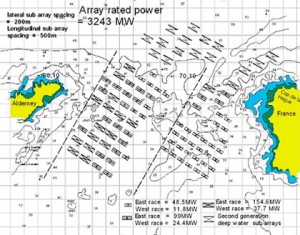 The relatively discreet depths at certain points within the Race will if necessary facilitate gradual modular installation over a long period of time. As more devices are installed interaction effects will reduce power output and it will be the case that an upper limit for economic energy extraction will be reached. The second figure shows the layout of the largest array that was deemed effective in terms of annual energy yield. It has a rated capacity of 1496MW and an annual electricity yield of 1.34TWh. In practice, a smaller array based in the East Race would be the most promising in terms of annual load factor (further details in reference 2 below).  The resource is also totally predictable which is less problematic for the electrical grid allowing it to forecast output for long periods into the future.
Further details of this work can be found the following publications