Title:Experimental analysis of the influence of proximity to channel boundaries and blockage ratio on far field hydrodynamic effects and performance of tidal turbine arrays.

Tidal energy is now the subject of an extensive amount of research. Several studies have clearly demonstrated the significant potential contribution to low carbon electricity production which the tides are capable of. An inevitable transition in this technology is from single turbines to arrays of turbines in suitable channels. This is necessary to reduce the current and capital costs, both of which are still considerably higher than conventional power generation sources. However much is still to be learned about the effects tidal technology have on their surrounding flow environment. Changing the specific position of an array with respect to flow boundaries and the level of blockage of a channel are two particular areas where large gaps in current knowledge have been identified. Understanding and quantifying any effects associated with these is likely to be of great interest to tidal developers.
This research aims to fill some of these gaps in knowledge. Experimental methods have been used to examine both the flow field and non-dimensional performance of tidal turbines when proximity to flow boundaries and blockage ratios are altered. Specific flow effects which have been examined include changes to the wake region of tidal turbine arrays, the constraining of flow in certain localized regions of the flow domain and changes to volumetric flow rate distribution in split tidal channels.
Results have demonstrated that changes to both the position and blockage ratio of a tidal turbine array in an open channel can cause considerable changes in all three examined cases. Changing proximity to flow boundaries and fence blockage ratio results in considerable changes to wake parameters such as velocity deficit, Reynolds shear stresses and turbulence intensity. However the same changes in array position, as well as blockage ratio, also affect the increase in flow velocity magnitude in certain regions of the flow, with possibly detrimental environmental effects. In split tidal channels, results suggest both of these factors also affect the imbalance in volumetric rate between sub channels. This is significant in the context of previous research which has shown this imbalance to be directly related to the maximum extractable power of such channels.
It is expected that the results of this research will ensure that tidal developers can make more informed choices when examining the optimum size and position of tidal turbine arrays in any future tidal energy projects. 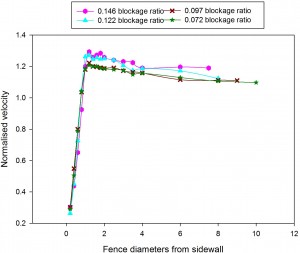 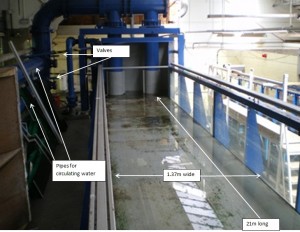 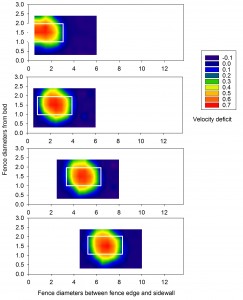 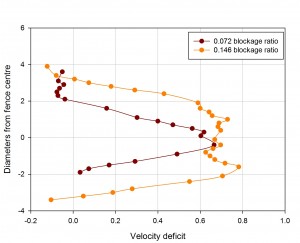