Hydropower is the oldest artificial power source known to man; it was already employed in antiquity; the Roman architect Vitruvius describes a water wheel driven by a current. In the Middle Ages and during the industrial revolution hydropower was employed on a large scale, with 25 to 30000 water wheels reported in England alone in 1850. The main hydropower machine employed then was the water wheel; this meant that individual installations had – in today’s assessment – very small power outputs ranging from 1.5 to (occasionally) 50 kW.
With the development of turbines in the 19th century serious hydropower exploitation started, with the construction of large dams and river power stations. Today, most of the hydropower potential in Europe is developed; there are only three segments of hydropower which are still unused:

It is estimated that in Germany alone, hydropower potential of 500 MW with head differences below 2m exists, which cannot be exploited for the lack of a cost-effective and ecologically acceptable converter technology.

The project has 13 partners from five countries of the European Union. Lead by the SERG group at the University of Southampton.

The three new technologies that were developed

A novel hydropower converter for head differences between 1 and 2.5 m, flow volumes from 1 to 10 m³/s with power ratings from 5 to 200 kW. The machine employs a new power conversion mechanism, using hydrostatic pressure, and is therefore a simple machine which is expected to be cost effective. The river bed is continuous, so that sediment passage is possible. The large cells imply that smaller fish may pass undamaged. 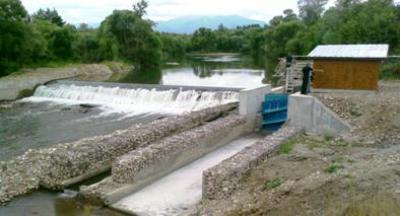 Hydro Power Pressure Machine undergoing testing on the Iskar river, Bulgaria, as a part of the HYLOW project.

The energy of free streams has fascinated man for a long time, and floating mills were employed widely in Europe until the middle of the 19th Century. The kinetic energy of the currents in natural rivers is however very limited, and the conversion efficiencies of the old floating mills were low. The machine is a floating water wheel housed between two pontoons which are connected with a bottom plate. The specific hydrodynamic shape means that it has a significantly higher conversion efficiency than classic water mills. 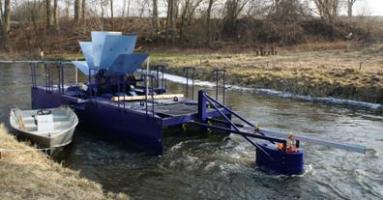 These micro-turbines were developed for application in pipe systems with low and medium pressures, and high volume flows where often the need arises to reduce pressure. The specific shape allows it to generate electricity from these pressure drops, where the energy was previously wasted. This is of particular importance since it allows for the generation of electricity in remote locations.