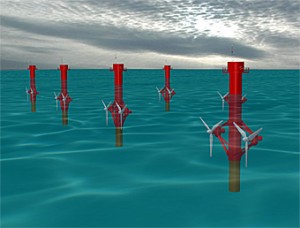 Marine current turbines can play an important part in achieving an increase in electricity generation from renewable resources, but the development of the required technology will demand significant research effort. This project will lead to a better understanding of the design implications of some of the features that distinguish marine current turbines from wind turbines, propellers and hydro turbines. Numerical modelling will be used to predict the flow over individual blades with the purpose of studying the loading, and the conditions in which cavitation and stall first occur. Related experiments will be carried out in a towing tank and a cavitation tunnel to validate these numerical predictions and to provide measurements of the effects of non-uniform incident flow, the proximity of the sea bed and water surface, and interactions between adjacent counter-rotating turbines. The results will be used in the development of methodologies that can be applied to the design of full scale marine current turbines.

Section performance data, which also include cavitation characteristics, are required for the detailed design of the turbine blades. It is found that suitable published data, with cavitation characteristics, are very limited and that there is a need to establish a better understanding of the cavitation performance of 2-D sections suitable for marine turbines. It is also considered that the capability of using simple 2-D numerical panel method (XFOIL) to predict cavitation inception at the design stage should be explored. An experimental and numerical investigation has therefore been carried out, covering forces, pressures and cavitation, on representative 2-D sections suitable for application to marine current turbines. The tests were carried out in the cavitation tunnel at Vosper Thornycroft on 4 possible sections.

As a continuation of the first set of tests to provide further detailed design information and validation date for numerical models a new experimental test rig was developed. This test rig has been designed, built and successfully used to measure power and thrust on model tidal turbines under various configurations and flow conditions. The figure below shows the configuration in the cavitation tunnel at QinetiQ (Website QinetiQ) in Hampshire.

Typical performance measurements from this phase of tests are shown in follwing figure. Similar data sets were also obtained for thrust measurements, addition hub pitch angles, and other yaw angles. 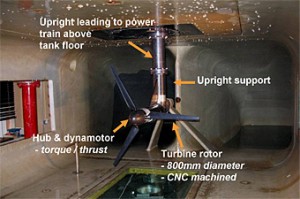 Setup in the cavitation tunnel.

Full details of the results and detailed discussion have been published in:

SERG-Tidal is a tidal turbine prediction program developed at the University of Southampton is based on a blade element momentum (BEM) program for wind turbines initially developed in the late 1980’s at the university by Barnsley & Wellicome.

The new code developed has major enhancements specifically established to deal with the operation in water and other additions including improved interpolation, extrapolation for stall data and options for tip loss factor. The programme is modular and designed to allow blade optimisation studies to be performed.
Example validation is shown in image below.

Full details of the program are given in a technical report and results discussed in the following paper:

The experimental validation data have also been used in collaboration with Garrad Hassan who are developing a tidal version of there popular commercial software GH-Bladed for analysis of wind turbines. The results from both our and Garrad Hassan’s simulations have been compared in: