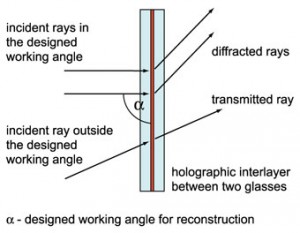 Holographic Optical Elements (HOEs) for building applications are light guiding elements consisting of a holographic film laminated between two sheets of glass. Direct light incident on the HOE glazing at a specific angle is redirected at a predefined angle via diffraction at the holographic interlayer as demonstrated in Figure 1.

Fig. 2 – General experimental set up for recording a transmission hologram.

HOE films are essentially photographic films (dichromated gelatine on a triacetate polymeric support) that have been exposed with coherent laser light, recording a diffraction grating onto the film. This exposure method keeps the phase relation of the exposing light waves which is lost in traditional photography where only the total amount of light incident on the film is registered. Therefore, unlike a photo, a hologram also contains information about the optical distance a photon has travelled before falling onto the film. This permits registering of a three dimensional image in an exposure set up as shown in Figure 2.

Fig. 3 – Reconstruction of an image recorded as transmission hologram

If both, the reference and the object beam fall onto the photographic plate from the same side, as shown in Figure 2, the resulting hologram is called transmission hologram. For reconstructing the holographic image of the recorded object, the transmission hologram is lit from the same direction as the former reference beam. If the observer is located on the opposite side of the holographic film facing the reconstruction beam, he sees the ‘transmitted’ virtual image of the recorded object (Figure 3). If, during hologram exposure, reference and object beam fall onto the film from opposing sides, a reflection hologram is generated. In this case the observer has to view the holographic film from the same side as the reconstruction beam to see the ‘reflected’ virtual image. The holographic film in essence works like a mirror.

HOEs are technically based on the same principles as standard holograms. However, rather than reproducing an image, incident light from the direction of the former reference beam is diffracted in a regular pattern at a preset angle. For this to work the incident light rays need to be parallel, such as provided by direct sunlight. 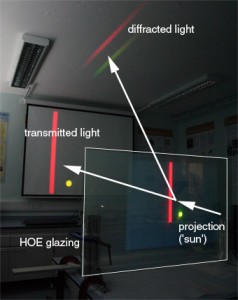 Fig. 4 – Demonstration of the basic function of a transmission hologram type HOE.

The main application of HOEs is as light guiding elements, in which case transmission holograms are used. The light directing function of such a transmission type HOE is demonstrated by Figure 4 which shows an experimental set up at the University of Southampton. Reflection holograms can be used as solar shading elements in order to reflect incident direct sunlight.

The Sustainable Energy Research Group has been involved in an EU FP5 research project on High Efficiency HOEs investigating HOEs for building applications as well as testing their compliance as a building material. Within this project the work of the researchers in Southampton centred on HOEs as a solar shading solution. Bespoke thermal simulation models were developed to accurately predict the performance of reflection hologram HOE glazings in different settings and under different climatic conditions. Aspects of this thermal simulation work on HOEs have been published in:

Fig. 5 – Schematic representation of the function of a building integrated light directing HOE.

The primary application of HOEs as a building product is to provide enhanced daylighting by redirecting natural light onto the ceiling of an internal space as illustrated in Figures 5 and 6. This natural light should enhance comfort for users and reduce artificial lighting requirements. This in turn reduces the air-conditioning loads associated with the heat gains that artificial lighting produces. An additional benefit is that HOEs do not block the view to the outside as the film is near to transparent. 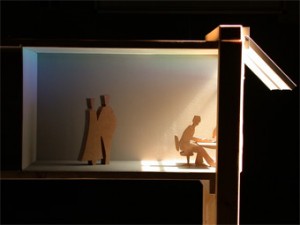 Fig. 6 – Scale model of an office room with a light directing HOE at Hochschule Wismar, Germany.

Installation of light guiding HOEs is complex. In particular the sensitivity of HOEs to the angle of incidence of the incident sunlight is a major drawback (Figure 1). This is due to the hologram physics which requires the solar altitude angle to be inside a narrow band of +/- 5° for the HOE to work effectively. Light incident outside this angle will pass through the glazing (Figure 1). As a consequence light directing HOE systems need to be tracked according to the sun’s position in the sky in order to achieve best performance. A further drawback is that the diffraction efficiency, i.e. the ratio of the diffracted to the transmitted direct sunlight, is generally less than 50 % (Figure 4). This means that glare reducing blinds are required for occupants close to the window.

Reflection hologram type HOEs that can be used as a solar shading solution offer the advantage that they are less sensitive to the angle of incidence than light guiding HOEs which would permit application of simpler tracking systems. Their main advantage compared to standard solar shading systems is the near transparent nature of the film which permits diffuse light to enter the room whilst direct sunlight can be blocked out to a certain extent depending on the diffraction efficiency of the HOE. However, such HOEs are not readily available at present.

HOE Test Rig at the University of Southampton 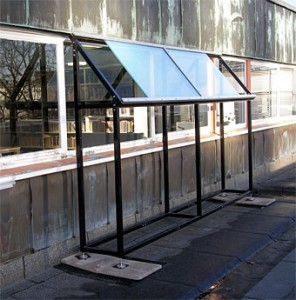 Fig. 7 – Outside view of the HOE test rig on the University’s Hartley Library roof.

In December 2007 a test rig to investigate the performance of light directing HOEs was installed at the University of Southampton (Figures 7 & 8). It is located on the roof adjacent to Level 5 of the Hartley Library and consists of two identical HOEs. The orientation is towards the South-East. The test rig installation is part of the IDCOP research programme funded by EPSRC.

It was decided to install a fixed HOE solution as the main focus is to quantify the absolute HOE performance under ideal conditions. Therefore, rather than adding complexity by integrating a tracking system, it was decided to investigate the performance at specific positions of the sun in the sky relative to the HOE. 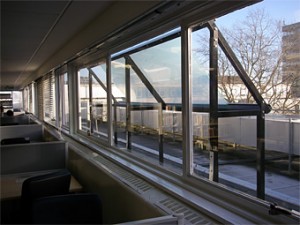 The monitoring which includes a luminance camera is being conducted on selected days with good sunlight conditions. First monitoring runs were conducted in May 2008 (Figure 9) and showed good results in redirection of sunlight. However, some issues with glare on the HOE glazing surface were also encountered.

Figures 1, 2, 3 & 6 have been generated at the Hochschule Wismar in Germany within the framework of the EU FP5 research project on High Efficiency HOEs. 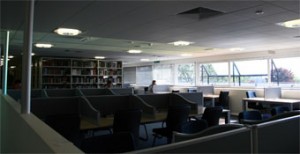 Fig. 9 – Inside view of the library with sunlight incident in the HOE’s ideal working angle.