28 day prediction for speed and direction from TELEMAC simulation

For example tidal data, simulation results around Portland Bill have been used, this site has a significant swing from the 180º flow reversal, allowing comparisons between fixed orientation and yawing devices. The variation of depth-averaged speed over 28 days from the simulation is shown in the first figure.

Hodograph showing direction and strength of the tidal flow. The first 5 days are the black lines and the shaded gray area represents the full 18 year forecast.

The T_TIDE package for MATLAB was used to determine the constituent ellipse properties by harmonic analysis, in which nodal corrections were applied, based on the central time of the input time series. Based on the solved constituents, predictions can be made from any start date with any time step. For the predictions in this paper, the tidal stream speeds and directions from the start of 2006 for 18 years have been generated at one minute intervals. A hodograph showing a forecast for 18 years is presented in the second figure and first 5 days are shown to demonstrate a typical cycle. The ellipse is offset south due to the constant flow component. This and the constituents with inclination close to 0° or 90° cause the tidal stream to swing away from rectilinearity. 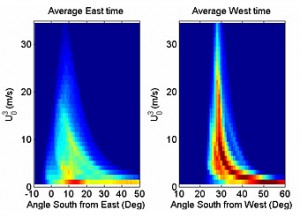 Binned data set showing a histogram of the times in the east and west. (Red denotes higher number of hours). The bins are defined by 1° intervals and in cubed speed steps of 1 m3/s3 from 0 to 35 m3/s3 and averaged data over 18 years

Some marine current turbine concepts do not turn to face the tide and instead rely on the tidal stream at the site to be bi-directional. Thus the rotor orientation is fixed but the blades are able to twist through 180 degrees capturing the energy by running the generator backwards. For this case direction is also important. The east and west directions is presented in third figure. This averaged data set provides a basis for comparing designs of turbines based on know device characteristics and for use in optimisation studies.
Initial finding are published in:
Blunden L.S., Batten W.M.J. and Bahaj A.S. (2008), Comparing energy yields from fixed and yawing horizontal axis marine current turbines in the English channel. Proceedings 27th International Conference on Offshore Mechanics and Arctic Engineering (OMAE 2008), Estoril, Portugal, 15-20 June 2008.