The group’s research has highlighted that at present environmental control facilities are often not correctly applied, or more usually, incorrectly used due to their complexity or unintuitive mode of operation. It has been shown that there is often lack of interaction between users and their buildings.

Façade interaction studies of an office building highlighted rather low amounts of user interaction with internal blinds. This study, which was conducted over a 40 day period in March / April 2006 looking at a south facing façade sample of 64 windows, revealed only 62 blind tilt adjustments in total as shown in Figure 1. About two thirds of these adjustments were observed to happen in just 4 rooms. Only 4 windows in two offices ever had their blinds adjusted in height, in total accounting for 11 adjustments (Figure 2).

Interestingly an occupant survey which was conducted in parallel, investigating user satisfaction levels within the offices behind these windows, showed a different picture with about half of the occupants believing that they at least ‘sometimes’ operate their blinds (Figure 3).

This suggests that being able to control the blinds may have influenced the perception of actually having done so. Other surveys and investigations appear to give some confirmation for this. However, it was observed that a negative view gets established in cases where the control measures are taken away from users.
Further studies of office buildings have revealed that on many days a number of window opening events occur in the late afternoon when the inside office room temperatures exceed acceptable levels. However, at the end of the working day there is no driver to remind or encourage users to close a window.
This behaviour is a particular problem during the spring and autumn periods as the building is heated and large heat losses are bound to occur. This problem has been highlighted by early morning thermography surveys conducted by the group, an example of which is shown in Figure 4. 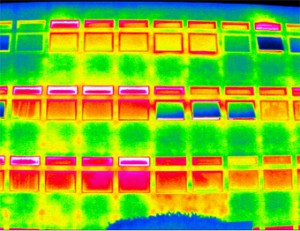 In conclusion it can be noted that occupant behaviour and expectation are critical issues in order to achieve a good building performance throughout all performance criteria.
Aspects of this work have been published in:
James P.A.B., Jentsch M.F. and Bahaj A.S. (2006) Window opening and blind usage patterns in a naturally ventilated office building: to what extent does user behaviour compromise potential building performance? Proceedings World Renewable Energy Congress (WREC-IX), Florence, 19-25 August 2006.