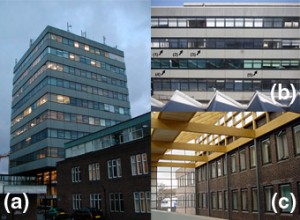 Further occupant surveys conducted by the group have shown that compromising one aspect of the indoor comfort conditions can lead to a perceived compromising of all other measures of indoor comfort. A survey conducted in June 2005 inside existing offices adjacent to the PV atrium (c in Figure 1) reveiled a significantly worse perception of indoor environmental conditions than the retrospective views of the time before the atrium extension was built. This is demonstrated in Figure 2 which represents the users’ rating of the room conditions away from ok. This basic tendency in perception was reinforced in a second survey in February 2006. Users felt that the enclosure inside an atrium had negative consequences for their personal environment.

However, monitoring of temperature levels, relative humidity and CO2 concentration inside selected offices did not reveil any unusual values. The monitored offices most of the time even outperformed a naturally ventilated reference office of the same orientation in another building. It was found that the reduced air movement on opening the windows into the atrium was most probably responsible for the perceived detoriation. Building users felt that windows that had previously delivered fresh clean air into the building were no longer working. However, this was not supported by air quality measurements.
Excerpts of the occupant survey work have been published in:
Jentsch M.F., James P.A.B. and Bahaj A.S. (2006)
A climatic envelope extension of an office building – perception and reality of the change in environmental conditions. Proceedings CIBSE National Conference, London, 21-22 March 2006. view paper as pdf-file