‘Photovoltaics in Britain: From Irrelevant to Ubiquitous’ 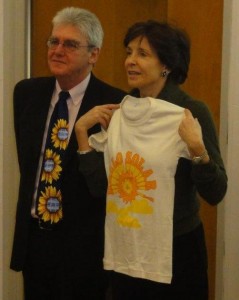 Professor Bernard McNelis, visiting professor within the Sustainable Energy research Group (SERG) at the University of Southampton  has recently given the David Hall Memorial Lecture to celebrate UK’s International Solar Energy Societies 40th Anniversary. The lecture entitled “Photovoltaics in Britain: From Irrelevant to Ubiquitous” was introduced by Dr Mary Archer, president from the UK National Section of the International Solar Energy Society (UK-ISES).

In the lecture Bernard indicted that: In 1975 the then UK Department of Energy produced a first review of the potential for Solar Energy, where the word ‘photovoltaic’ or ‘PV’ did not appear once. Bernard at that time questioned ETSU (the Department’s Advisor) about the omission, only to be informed that “PV was for space, maybe for Africa, but was ‘totally irrelevant’ to the UK”. Nowadays, it is hard to travel more than a few hundred metres in suburbia or throughout Britain without seeing roof-top-installed PV. It is becoming more prevalent on houses and barns in outlying areas of the countryside with an increasing number of Megawatt-scale PV farms being created.

The UK-ISES agenda has always included PV, and the 40th Anniversary of the launch of the Society was perceived as an appropriate time to review the status quo and to examine the changes, both economic and political, that have led to the more widespread use of PV. The lecture described the scientific and technological advances over the past forty years and paid tribute to the visionaries who have helped change the public’s attitude towards the environment, which along with PV’s clean credentials, have made PV such an attractive proposition. This is further emphasized by the fact governments have established long-term support mechanisms to bolster and further strengthen the market.

The lecture was thoroughly well received and finished with some thoughts for the future.