Climate change is one of the largest threats both for the global economy and the local community. It is predicted that, by 2100, average temperatures could rise as much as six degrees Celsius. The UK is anticipated to become hotter and drier in summer and milder and wetter in winter even under low carbon emissions scenarios. This can be expected to have significant impacts on the built environment, where a haphazard approach could lead to solutions as shown in Figure 1. 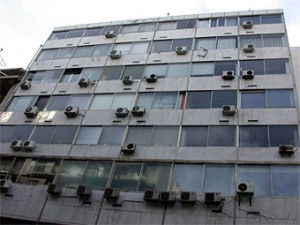 Whether or not it has been induced by climate change, the UK has experienced exceptionally hot summer months over the last decade. For example, since 1998 the mean temperature for the summer months June, July and August has risen by about 0.5 °C in the South-East of England (Figure 2). If such a trend continues, then radical changes will need to happen in the urban environment in order to avoid extensive overheating of both buildings and city spaces. In addition to rising fuel prices, which may render selected buildings uneconomic to operate in the future, a number of buildings are at risk of being uninhabitable in summer if the climate develops as predicted under a high global emission scenario. Both, individual buildings and entire cities are required to adapt to such scenarios.

Fig. 2. South-East of England, deviation of the combined average temperatures for the summer months June, July and August from the 1961-1990 mean (Data source: Met Office).

Current research of the Sustainable Energy Research Group focusses on evaluating buildings and their façades in terms of their vulnerability to climate change with a particular emphasis on summer overheating. First assessments show that many buildings in the commercial sector are at risk of being uninhabitable in the future without additional energy-intensive cooling devices.

Extensive climate change assessment studies have been carried out on a tower block at the University of Southampton. This building, which has been monitored in its environmental performance (temperature, relative humidity) in various stages from Autumn 2005 to Summer 2007, has shown significant summer overheating occurrences during extended heatwave periods as can be seen in the building monitoring section of this website. Comparison of monitored July 2006 temperature data with building performance simulation results using an industry standard weather file for a ‘typical’ hot summer in Southampton revealed stark differences in overheating performance of this building (Figure 3). Whilst the majority of offices only showed a moderate overheating in the simulations with the industry standard weather file, significant overheating was observed in reality. In addition to this simulation, measured Southampton weather data was used to verify the validity of the simulation model. As can be seen in Figure 3, a simulation run using Southampton weather data showed temperature results largely similar to the measurements inside the building. In addition, a climate change adapted industry standard weather file for the 2050’s which was generated with the CCWeatherGen tool shows a far better match with the 2006 observations than the original file. This serves to highlight that climate change adapted weather data may serve to better predict building performance than current weather files derived from historic data. This is reinforced by the fact that summers like the one of 2006 can be considered to be a standard summer in the 2050’s which are predicted to have summer mean temperatures of more than 2 °C above the 1961-1990 mean (see also Figure 2).

Initial work has been published in: