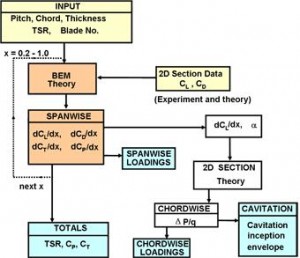 Flow chart depicting some of the components of SERG-Tidal.

SERG-Tidal is a tidal turbine prediction program developed at the University of Southampton is based on a blade element momentum (BEM) program for wind turbines initially developed in the late 1980’s at the university by Barnsley & Wellicome.
The new code developed has major enhancements specifically established to deal with the operation in water and other additions including improved interpolation, extrapolation for stall data and options for tip loss factor. The programme is modular and designed to allow blade optimisation studies to be performed. Full details of the program are given in a technical report and results discussed in the following paper:
Batten W.M.J., Bahaj A.S., Molland A.F. and Chaplin J.R. (2007) Experimentally validated numerical method for the hydrodynamic design of horizontal axis tidal turbines. Ocean Engineering, Volume 34, Issue 7, May 2007, pp 1013-1029. view paper
The experimental validation data have also been used in collaboration with Garrad Hassan who are developing a tidal version of there popular commercial software GH-Bladed for analysis of wind turbines. The results from both our and Garrad Hassan’s simulations have been compared in:
Bahaj A.S., Batten W.M.J. and McCann G. (2007) Experimental verifications of numerical predictions for the hydrodynamic performance of horizontal axis marine current turbines. Renewable Energy, Volume 32, Issue 15, December 2007, pp 2479-2490. view paper 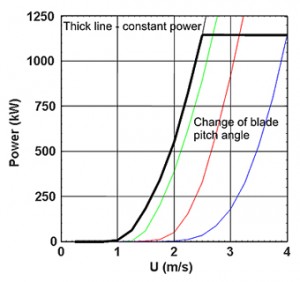 Predicted 20m diameter rotor with a design speed of 2.5m/s, the rated power of this design would be 1100 kW with a design thrust of 750 kN.