Title: The accuracy of the actuator Disc-Rans approach for modelling performance and wake characteristics of a horizontal axis tidal stream turbine.

Tidal stream energy has the potential to supply power with low carbon dioxide emissions, but the technology is still being developed. Horizontal axis tidal stream turbines have seen the greatest development, and to generate energy at a commercial scale they will be installed in multi-device arrays. In the array, performance of downstream devices will be affected by the wake of those upstream. The actuator disc-RANS model can be used to optimise array configuration.
A review of previous studies which used actuator disc-RANS showed that the model has been implemented with a wide range of parameters (boundary conditions, turbulence model, turbine model and dimensions), and predictions of velocity magnitudes in the wake of a turbine varied between similar published studies. The accuracy of the model for tidal turbines has not been demonstrated, and appropriate parameters for applying the model are not apparent from previous work. Without validation the model may not be applied to arrays with confidence. The purpose of this thesis is to identify appropriate parameters, and to demonstrate their accuracy through verification and validation studies.
The first aspect of the work is to identify parameters which achieve accurate predictions using the uniform turbine model. If the k − ε turbulence model, turbulence sources at the disc, and a free-slip wall to model the free surface are used, the model produces accurate results. Comparison to centreline velocities measured experimentally in the wake of a porous disc gives a coefficient of determination of 0.61-0.97 depending on the turbine thrust coefficient, with a maximum discretization error of 1.5%. Comparison to centreline velocities measured in the wake of a scaled tidal stream turbine gives a coefficient of determination of 0.92 at a thrust coefficient of 1, and a maximum discretization error of 9%. When the blade-element actuator disc turbine model is used comparison to measured centreline wake velocities gives a coefficient of determination of 0.94 at a thrust coefficient of 1, and a maximum discretization error of 9%. Comparison of turbine power coefficient shows that the model under predicts experimental data by between 2% at low tip speed ratio, and 9% at high tip speed ratio.
The second aspect examines the capability of the turbine models to predict the power output from an array. A comparison between the uniform, and blade element actuator disc, finds that the blade element model predicts 13% higher power output due to compounded differences between the models over the array. Modelling the support structure increases predicted power output by 0.2%. Results also show that if ambient turbulence intensity is increased from 15% to 40%, overall power output from the array increases by 14%.
The results provide array modellers with appropriate parameters to achieve accurate predictions using actuator disc-RANS. They demonstrate that the model may be used with confidence provided these parameters are used, and discretization error, Froude number and blockage ratio are similar to the cases tested. The results also demonstrate the difference between turbine models when estimating the power from an array, and a requirement to accurately characterise turbulence intensity at a tidal site and represent this data in the model. 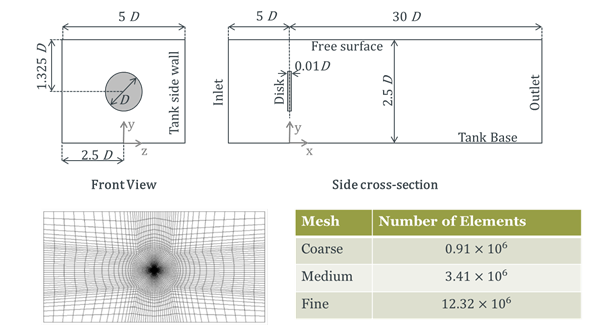 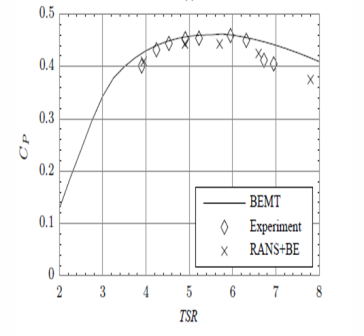 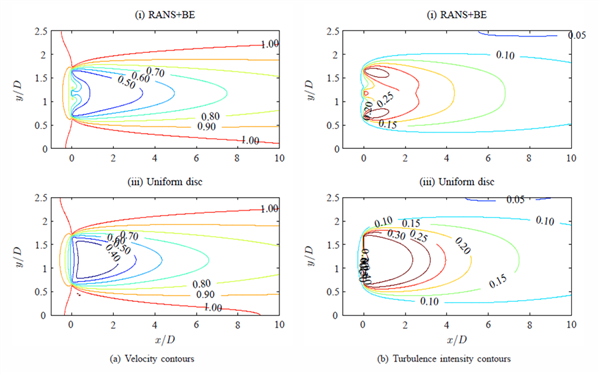 Comparison of modelling methods in predicting the wake