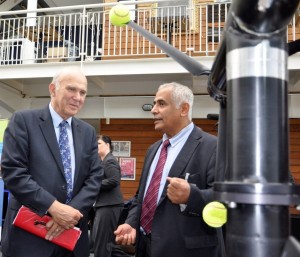 As part of the Future Solent low carbon conference; held on Friday 18th October, Professor Bahaj met the Rt. Hon Dr Vince Cable, UK’s Secretary of State (SS) for Business Innovation & Skills (BIS) and discussed with him the low carbon options for the Solent region. The Secretary of State visited the stand of the Sustainable Energy Research Group (SERG), representing the University of Southampton and the Faculty of Engineering and the Environment.

Prof Bahaj commented “we have discussed areas around low carbon, which is the theme of the conference. Our discussion led to the recently announced Catapults being funded by BIS through the Technology Strategy Board”, specifically those related to renewable energy and cities”.

At the stand, Professor Bahaj discussed the work undertaken by SERG in the marine energy and described the operation of marine current turbines referring to the 1.0 metre diameter model turbine exhibited on the stand. He reported to Dr Cable that the Southampton pioneering research on such model turbines is now informing industry on the salient issues that are likely to be encountered at scale and at the development of appropriate sites for extracting marine energy from flowing waters in the oceans.

At the conference, Dr Cable explained the opportunities for the region in relation to carbon reductions and announced an award a £3 Million from the Regional Growth Funding (RGF) to support the Future Solent “Green Growth Programme”. The award, to be financially administered by Southampton City Council, is aimed at developing SME’s in other activities in low carbon in the region selected by Future Solent.

In his talk at the conference Prof Bahaj explained to the attendees the regional prospects for marine energy describing the potential of electricity production from sites such as Portland Bill, the Isle of Wight and the Channel Islands.